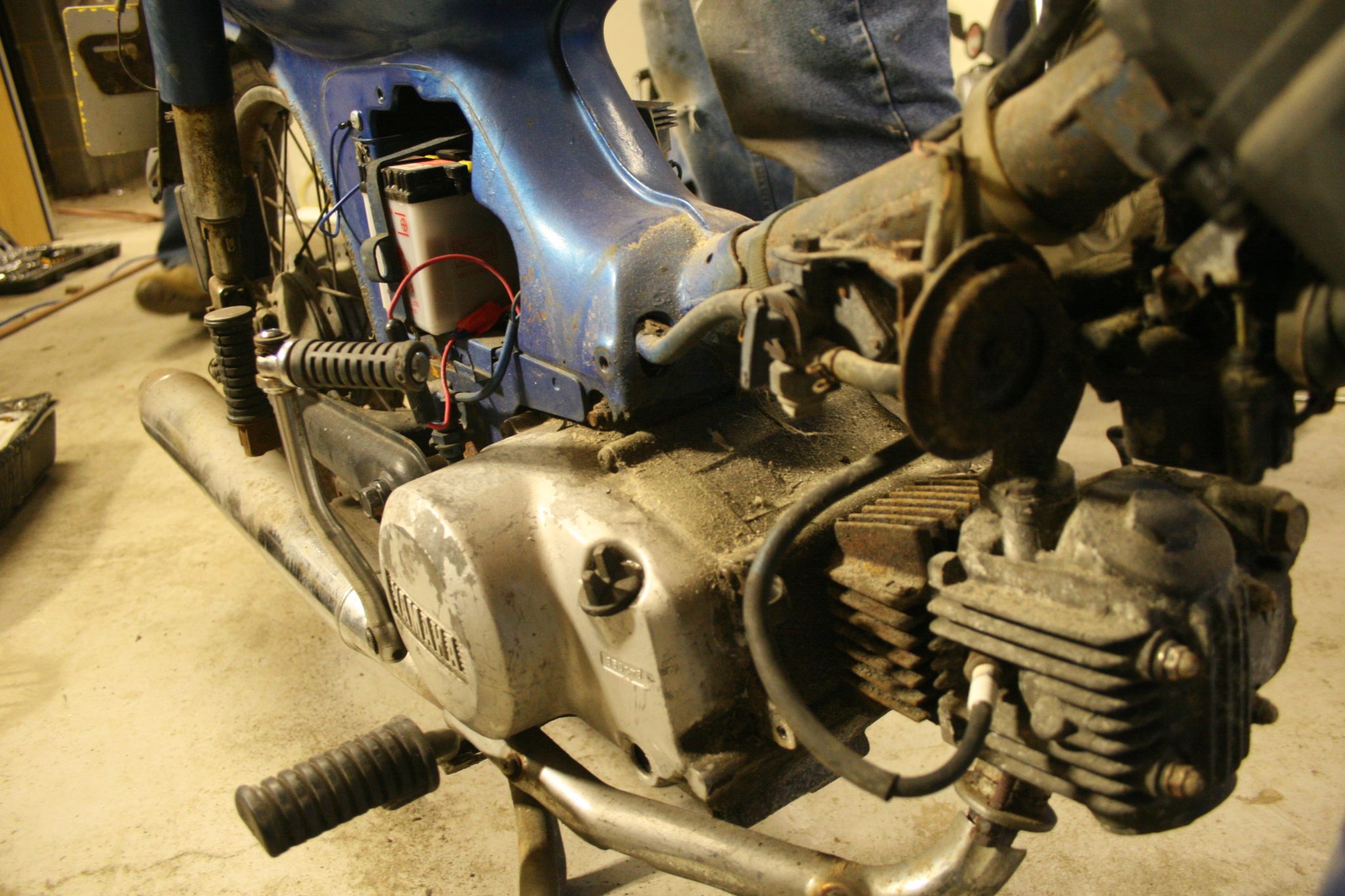 The truth about Nick’s bike.

Arriving at our digs in Dresden we unloaded all the crap out of the van, trying to ignore the mad big boned woman shouting at us from an upstairs window. Only when the trufflehog waddled downstairs to give us a bollocking did we realise we were in the wrong place. After a few apologies about unloading a pile of shit in their garden and flattening their city during the war, we proceeded to the correct place. Kaspars greeted us with home brew in hand.

Only after we’d variously described the taste as a cross between creosote and sewage did Kaspars admit this was his “experimental” batch. The only way to wash away the taste was with copious amounts of Heineken and a hog roast. Our first night in a proper bed in four days awaited.

The next morning we saddled up for our first day on the bikes. We headed for the Czech Republic and our first scheduled stop in Kutna Hora to visit the infamous “Church of Bones”. Being a Star Trek fan and slightly retarded, Matt was excited about visiting the burial place of Leonard McCoy. Upon reaching Kutna Hora we parked up and headed for the big church on the hill. Obviously someone had done a tidy. There wasn’t a bone in sight. Wrong church.

Three churches later and we were still boneless. As it turned out the actual church was the smallest most unassuming one of the lot, at least on the outside. You can imagine Matt’s disappointment when he realised “Bones” actually meant bones. Forty thousand of them, all on display. Weird. We had a wander and decided to leave before a man appeared with a scythe.

We thought the place had jinxed us as we spent the next hour trying to leave the village. Despite following various routes out, including via a field and a quarry, we kept coming back to the same place. We decided Kaspars must have downloaded 18th century mapping software and resorted to a good old fashioned compass. When that didn’t work we asked an old lady in the library.

At least the unplanned excursions had proved the bikes were ok off road though. Nick kept stopping without warning and causing mass pile-ups. To add insult to injury he kept banging on about his bike being the fastest. Words which would come back to haunt him.

Having finally found the road out we headed for Slovakia and a campsite by a river overlooked by Trencin Castle. Having arrived late we wandered to the only bar left open in town. A proper locals bar. Job done.
Next morning we were up early and keen to crack on. After an hour or so of riding we pulled into a lay-by at the bottom of a hill to check the map. As wet set off to leave we noticed the lack of last minute faffing and realised that Nick was no longer with us. A quick glance up the hill revealed a speck in the distance which slowly materialised into Nick. He coasted into the lay-by claiming that his bike had “just died”.

We all looked at each other wondering if we would rue the day we bodged a bike together and then gave it to Nick claiming that it had cost us £185.00 and was “one owner from new”. The truth was it had cost us about £15 and a couple of sexual favours to the MOT tester. At the roadside we carried out a series of checks which involved swapping bits from Oz’s bike. This led to massive sulking on his part since his bike was actually one owner from new.

The diagnosis was that the coil pick-ups had failed. Our cost-cutting plan had backfired and the truth had come flooding out.

As we were already behind schedule a decision was made to load the bike on to the trailer and put the spare engine in later that evening at the camp site. It was a fairly depressing position to be in after only 2 days of riding. If only we’d doubled the budget on Nick’s bike to £30 we’d probably still all be riding.

Nick climbed reluctantly into the van. We carried on until around 9pm that night, crossing the border in to Northern Hungary. By chance we found a beautiful campsite next to the River Tisza. We unloaded the bikes as the sun set over the water. Kaspars was complaining about a new whine that the Transhit had developed but it stopped as soon a Nick got out.

First intended job, put up tents and fix the bike. First actual job – crack open cans of beer. The camp site owner then offered to cook us fresh fish (as long as we kept Charlie away from his daughters) and broke out his home made palinka.

Thundertorms and putting up tents whllst pissed do not mix.

We awoke the next morning slightly the worst for wear and realised that there was rather a lot to do. While Matt and Kaspars took the old engine out, Oz unpacked the new one. Nick rustled up some breakfast. Charlie emerged from his tent with a tissue stuck to his cheek.

Oz presented the spare engine, which looked suspiciously oil-soaked. He assured us he had packed the correct engine and it was not the one that pissed oil everywhere during testing at HQ. The triumphant starting of the bike turned into disappointment as (predictably) oil spewed out of the engine, Oz, the cock-knocker had indeed managed to pack the wrong engine.

This was no time for quitting though so we decided not to tell Nick. The unpalatable truth came out when a few miles down the road Nick complained about the bike being slow. The last time a bike was too slow for Nick it had seized.

Kaspars confirmed he’d been tail-gating Nick at 35mph in the van. The seriousness of the situation was further evidenced by the film of oil all over the front of the van. It was going to be a long trip…