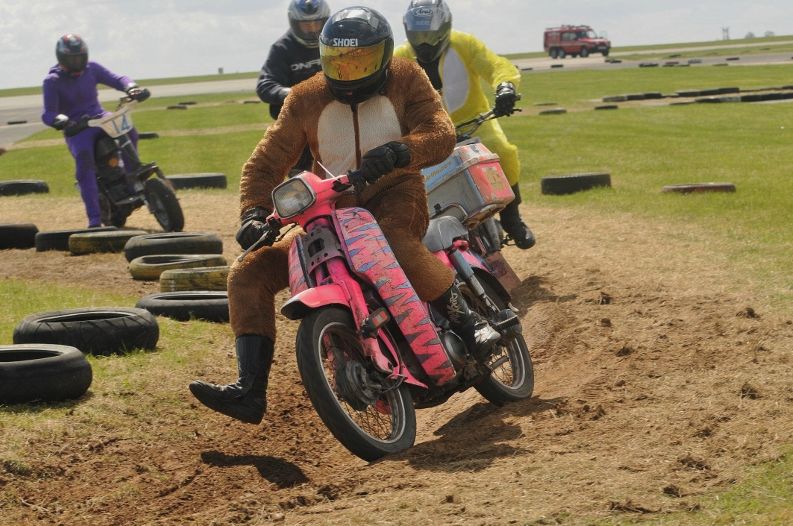 The last time we decided to go moped endurance racing we held up the event for an hour while one of our riders was scraped up off the floor, bundled into an ambulance and sent to A&E. After a quick phone call to tell his missus where he could be found we carried on racing and tucked into his packed lunch. We felt a slight sense of guilt on discovering he’d dislocated and broken his wrist, arm, and shattered his collarbone into several thousand pieces.

This slight mishap did at least give us an excuse for finishing up the race bellend last. This time things were going to be different. We arrived at RAF Wittering looking to put in a performance worthy of a factory Moto GP ride.  That was until Charles opened the van doors.

Our “race” bike was one from the Wrong Way Round Sahara trip that had been in storage (i.e buried in the workshop under a pile of car seats) for three years. It hadn’t even been cleaned. There was still a crusted coating of Saharan sand woven with cobwebs and fluff, which at least hid the rust.

All around us in the pits teams were feverishly tweaking carburettors, checking spark plug gaps and topping up their oil. Meanwhile we debated whether chocolate hob nobs or flapjacks were the order of the day and Charles went off for his traditional pre-race dump.

We were encouraged by the fact that we normally score healthy bonus points for our fancy dress outfits. Alas we’d finally had to retire the faithful Mr

Blobby after he suffered a career ending highside last time out whilst dueling with Bananaman. This resulted in the loss of a Blobby leg, hand and eye so we had to put him out to pasture in his new role as a polishing cloth.

We’d left it too late to find a decent replacement so we had to make do with a couple of last minute outfits from the local fancy dress shop. At least they were cheap though – apparently there is not much call for dressing as a reindeer in April.

After hob nobs and flapjacks we decided to head out for some practice laps. Five minutes later the verdict was in. The bike wouldn’t rev properly – perhaps due to the three year old African petrol gumming up the carb and the three year old Saharan dust clogging up the air filter.  The suspension was also shot – so it was slightly more uncomfortable than doing a lap on wooden space hopper. We thought about doing some maintenance but got distracted because the kettle was on again.

The blast of an airhorn signalled it was time to take to the grid. It was to be the usual Le Mans style start which involves all the riders on one side of the track doing a sprint across to mount and start the bike. Easier said than done whilst in full fancy dress. In reality it’s more like a scene from It’s A Knockout with people in fat suits and clown shoes bundling into each other but thankfully without the commentator taking the opportunity to bugger the contestants while they are lying prone.

As was made clear in the pre-race briefing, the secret to winning is to do the most laps. Teams that do the most laps tend not to crash too much, spend minimal time doing rider swaps and have a reliable bike that doesn’t need fixing during the race.

The start started well. Oz managed to avoid getting his antlers tangled up with George from Rainbow and got to the bike ahead of most of the field. He then undid all the good work by completely failing to start the bike and would have left the grid last were it not for the team who weren’t paying attention and we’re still queing for the burger van.

It was during the rider changes that we started to fall back. Most teams were using a lap

board system to indicate a change of rider and came into the pits ready to do a seamless swap. Our system worked on the basis of coming in when knackered or in need of a pee. Not only that but our riders were mostly to be found hanging around our camping spot rather than waiting in pit lane so to do a rider change we had to weave our way through the campsite and spend at least twenty minutes extracting guy ropes and tent pegs from our back wheel.

Charles took top prize for longest changeover after choosing race day to try on the full leathers he’d borrowed off someone in the pub. Even with all of us helping it was like trying to stuff a sleeping bag into a sock. No single rider was blameless however.

Damo, who had proclaimed he was “taking it easy” went out next. After some initial tentative laps where he tried to understand the conditions he quickly worked out where the optimum parts of the circuit to lose the front end were and set about throwing himself to the floor as often as possible. Matt in contrast proclaimed he would “not be taking it easy” and found some previously undiscovered places to crash.

Kaspars, who had flown in from Latvia especially for the event, decided he couldn’t actually be bothered to ride as he was mostly interested in drinking the Black Balsam he’d bought with him.

About three hours in to the race came the moment that finally sealed our failure. After spending about five laps trying and failing to overtake a rider dressed as a giant chicken, Oz decide that pulling wheelies was the way forward at which point the footpegs parted company with the bike.

After wobbling back to the pits we took a team decision that we’d look for the footpegs later and have an hour for lunch instead.  After a leisurely feast of pasties, monster munch and raspberry trifle we thought about going back out even though we would have really rather had a nap. Then we remembered we still didn’t have any footpegs so we did have a nap while Matt trudged around the far end of the circuit to retrieve the missing part which then took a further half an hour to repair due to stripped threads.

We now had only one chance for glory. The most coveted award of all – BEST CRASH

The trouble was that this year the competition was high with quite a few teams having worked out the most spectacular way to impress the judges mostly by slipping off on the hairpin and making sure you got run over by the entire cast of Sesame Street.

As the race progressed the competition really hotted up. A rider in a giant whoopee cushion managed an end over end tumble of both bike and rider. We still thought we were in with a shout until Papa Smurf managed a face plant which scored so highly for artistic impression and technical difficulty that we knew the prize was gone.

The final insult came when we didn’t even come last meaning that in spite of all our dedicated fuckwittery we’d still beaten four other teams. We did however claim “Most Drunk” award

at the post race party, after covering the  band in cider and breaking a sofa during a particularly large bundle, a feat we  achieved with some help from Team Noodle and the Nob Heads, who not only won the race, but also had the best fancy dress, best looking bike and are quite good at crashing. A banana is going up their exhaust at the next event.

Until the next time…

PrevPrevious PostWrong Way Round Sahara Part 9
Next PostIsle of Nan TT: Closer to the HedgeNext