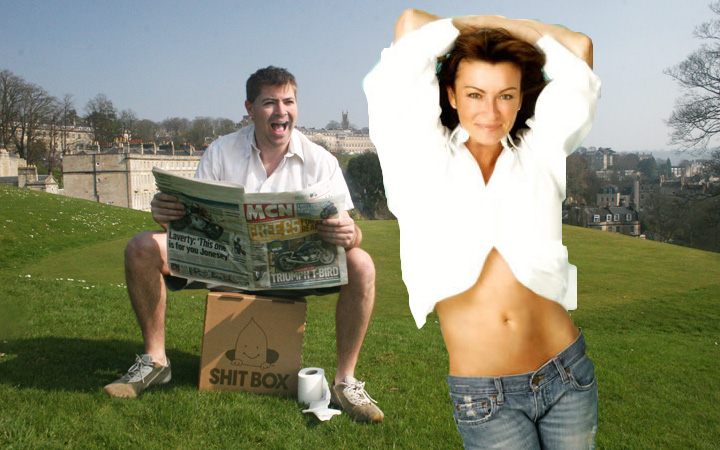 In search of Suzi Perry

Even though we’d had eight months preparation for the trip, Oz still felt the need to send a strongly worded email to the rest of the crew the night before departure. There was emphasis on the importance of bringing stuff. Like passports.

Our send off was surprisingly low key. In our heads, crowds would be lining the streets waving Union Jacks as the Police gave us a priority escort to Dover. Loved ones would weep as we rode off into the distance. World leaders would send messages of support. The reality was somewhat different.
We woke up in Matt’s living room with Rodney (the most ridiculous dog since Scrappy Doo) asleep on Oz’s head. Serves him right for invading Rodney’s basket, thinking it was his sleeping bag. Even so, we had a spring in our step.

We were finally off and our first stop was the Assen Moto GP and a photo shoot with Suzi Perry. With the bikes loaded on the trailer we climbed in to the trusty Transhit. Now then, before we go any further, we can already hear the purists muttering disapprovingly that sticking the bikes on a trailer is cheating and therefore we can’t be real adventurers. We would like to plead our case at this point:

We think you will agree, a case well argued.

It was nice to be starting the journey in relative luxury since Nick had smoozed the P&O press office and got us a free sailing and an upgrade to Club Class. The full English breakfast was a winner. There was breaking news that that Michael Jackson had snuffed it so we spent the rest of the crossing shouting “Shamone”, grabbing our crotches and moonwalking to the toilet. He would have appreciated the tribute for sure.

We crossed in to Holland and celebrated this milestone with a round of Haribo Tangfastics. It was during our “spot the windmill” competition that we noticed the curious Dutch hobby of “bridge dwelling”. In England no one stands on a motorway bridge unless they are armed with a speed gun. In Holland it was prime picnicking territory. The full table and chairs set was out. It was a curious sight but upon reflection a motorway bridge is probably the highest point in Holland. For them it was probably like mountaineering without the knackering bit.

We rolled in to Assen early in the evening, pitched tents, and cracked open some cold beers. Why is it that at every biker campsite there is some fuckstick who thinks screaming an engine on the rev limiter while stationery is a crowd-pleaser. For the record it is only funny when a pissed mate then stamps the bike in to first gear as everyone watches fuckstick being dragged through the burger stand by his own bike.

Naturally Matt took it upon himself to show the campsite some proper entertainment. Some stand up wheelies ensured the number plate was no more. Since the beer was flowing by then, the rest of us thought this was a good idea and all joined in. Things got slightly messy, the consequences of which only hit home when we got up the next day. Somehow Nick, having done the least number of “stunts” had caused the most damage. Three out of his four indicators were smashed and his freshly potted garden allotment was a total ecological disaster.

Our impromptu stunt performance was not the best start to an 18,000km trip. At least we hadn’t blown up any engines. And so it was race day. The sun was out, Assen was packed, and Rossi chalked up his 100th win. Better still we had our photo shoot with Suzi Perry to look forward to.

Since the noise from the bikes and crowd was deafening, Oz diligently set his mobile to vibrate so he wouldn’t miss Suzi’s call. Sadly we had not factored in all four of us slipping in to a beer induced coma whilst sun-bathing on a grass bank.

Bollocks. “You have 1 new voicemail”. In a flurry of activity Oz woke everyone up only to realise the message was left half an hour ago and Suzi was leaving for the airport in …er…. half an hour. We can only imagine her disappointment at missing her chance to meet us. Suzi, if you are reading this we are very sorry and we’ve put a signed photograph of us in the post to you as a small consolation.

An artist’s impression of us meeting Suzi.

The next morning there was a huge traffic jam leaving the circuit. A police road block up ahead was breath-testing all vehicles. Had we actually left on schedule it may have been a cause for concern. In typical fashion by the time we’d barbequed leftover burgers for breakfast and badly packed our tents, it was nearly 11am.

In a moment of Inspector Cluesoe incompetence, the Dutch police officer failed to notice the van was right hand drive. With an air of authority he breathalysed Charlie in the passenger seat. It was almost a disappointment Charlie passed as it would have been comedy gold watching him get arrested for driving under the influence without the aid of a steering wheel. After about ten minutes of eye-watering laughter we continued on our merry way to Dresden. Here we would rendezvous with Kaspars, our support vehicle driver, Russian speaker and navigator.

PrevPrevious PostSponsors and Showbiz
Next PostThe truth about Nick’s bike.Next