Part 9 - What would Bear Grylls do?

To most people the French Foreign Legion conjures up images of men with rifles trudging up sand dunes. It was with some surprise therefore that we found ourselves sat in their barracks drinking cold beer.  Just a few hours earlier we were well and truly in the camel poo.

Two days ago we rolled in to the oasis camp at Erg Chigaga, more by luck than judgement. We were thankful for the shade, water, and somewhere to rest up until mid-afternoon. Only then would the temperature  be bearable enough for us to ride without being microwaved.

In camp it was too hot to sleep. Passing the time was a slow process, it’s not like you can talk about the weather. We slipped in to a dazed silence, only permeated by the rustling of the palm leaves and the croaking of the frogs.

There was a moment when we thought we might be hallucinating but we all heard it.If there was one thing none of us was expecting to hear in the desert, it was the sound of frogs.

The camp had a small water channel about six inches across running right through it in which a serious frog party was occurring. Oases are not just for weary travellers then. 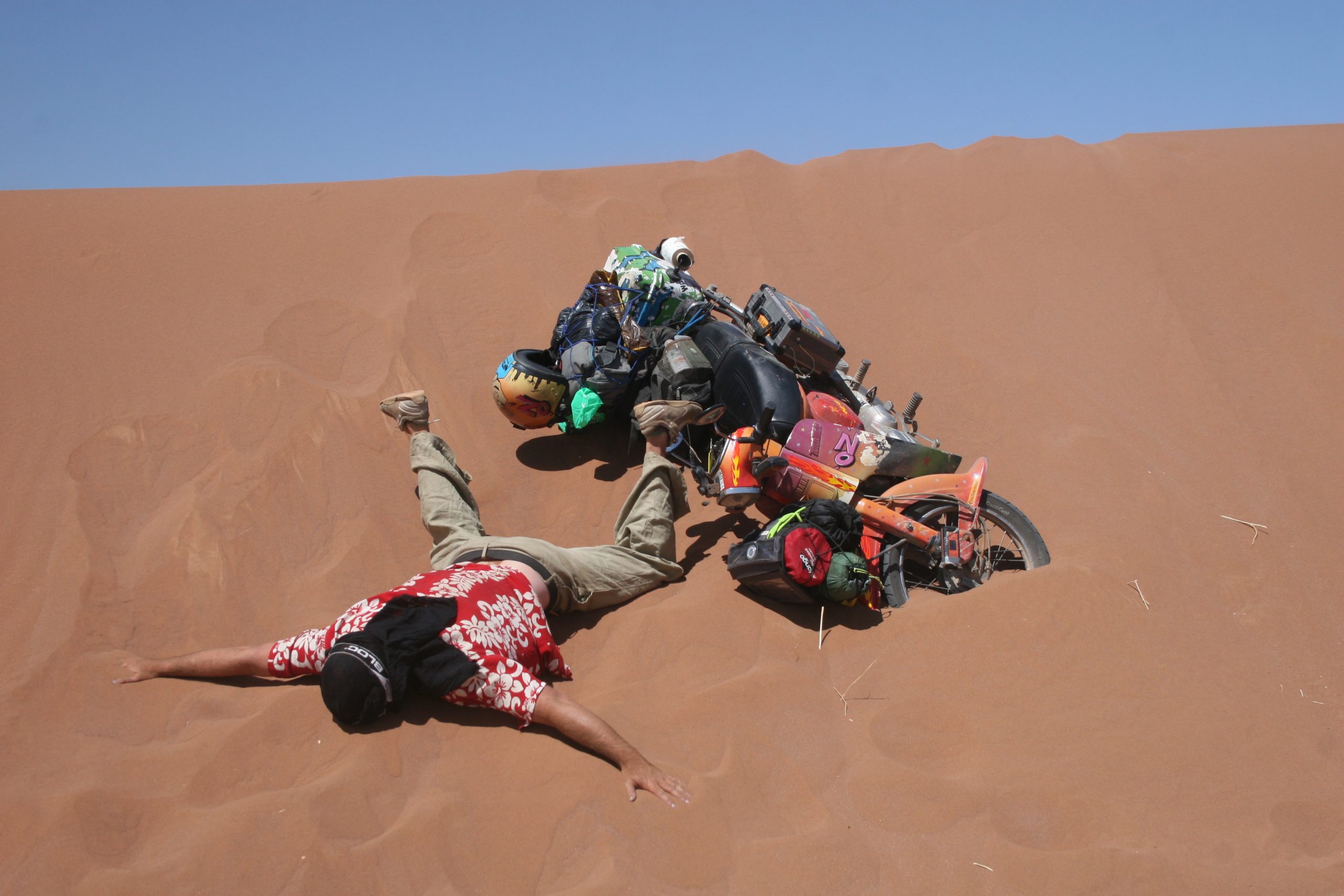 Something was not quite right

Our plan was to navigate towards the Draa valley. If we set off early evening the locals in camp estimated two further days riding. This was based on riding for 8 hours a day, sheltering during the midday hours.

We filled our camelbaks and strapped another twelve litres of water on to Charlie’s bike. It fitted perfectly in the space where the pannier containing all his clothes used to be. We can only apologise to the person who found said bag and the fossilised remnants of Charlie’s undercrackers.

Unfortunately the staff only had enough food to sustain themselves while they tended the camp so there was none spare. We would have to make do with the stale bread and jam.

What's the opposite of hypothermia?

Of more immediate concern however was Greg’s health. To the trained eye heatstroke is an acute condition of hyperthermia caused by prolonged exposure to excessive heat. To the untrained eye it manifests itself as a person with no sense of humour who is generally useless. So it was only when Greg lost his sense of humour that we knew something was not quite right.

Over the last couple of days he had become more and more withdrawn. Whenever we stopped to take photos he would just sit on the bike with his head on the handlebars. In the camp he had barely said a word. We noticed he had started to look pale (which is quite an achievement with sunburn). 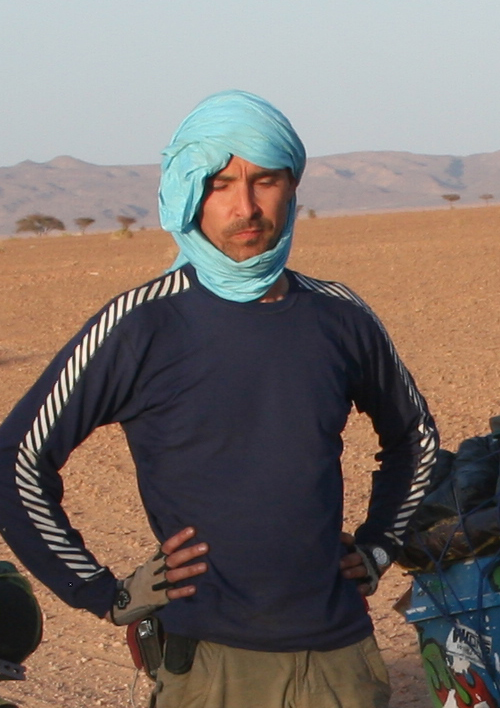 But not quite gone

At first we had ignored it, deciding that Greg was just having a tougher time than the rest of us. Later he admitted that he’d been puking and was having dizzy spells. Since this could not be attributed to 10 pints and a kebab, we realised he was suffering with the intense heat.

In the circumstances we didn’t have a lot of options except to make our way out of the desert once the conditions eased.

At 4.30pm we set up off continuing west, following the setting sun. We had about two hours of daylight and although it wasn’t much, psychologically we all wanted to leave the camp and feel as though we were heading somewhere.

The storm before the tornado

That ride was one of the most spectacular. We descended in to an ancient dry lake bed flanked by rocky hills.  The sun was disappearing in a fiery orange glow. It was a moment to savour. Maybe even Greg enjoyed it. He didn’t say.

There were vast areas of baked sand that cracked like a creme brulee as you rode. Even though time was of the essence we couldn’t resist riding in massive circular loops round and round. For that moment we were in our own personal playground and all our troubles were forgotten. We set up camp, tired by happy. Apart from Greg who was just tired.

The next day was quite simply, horrendous. 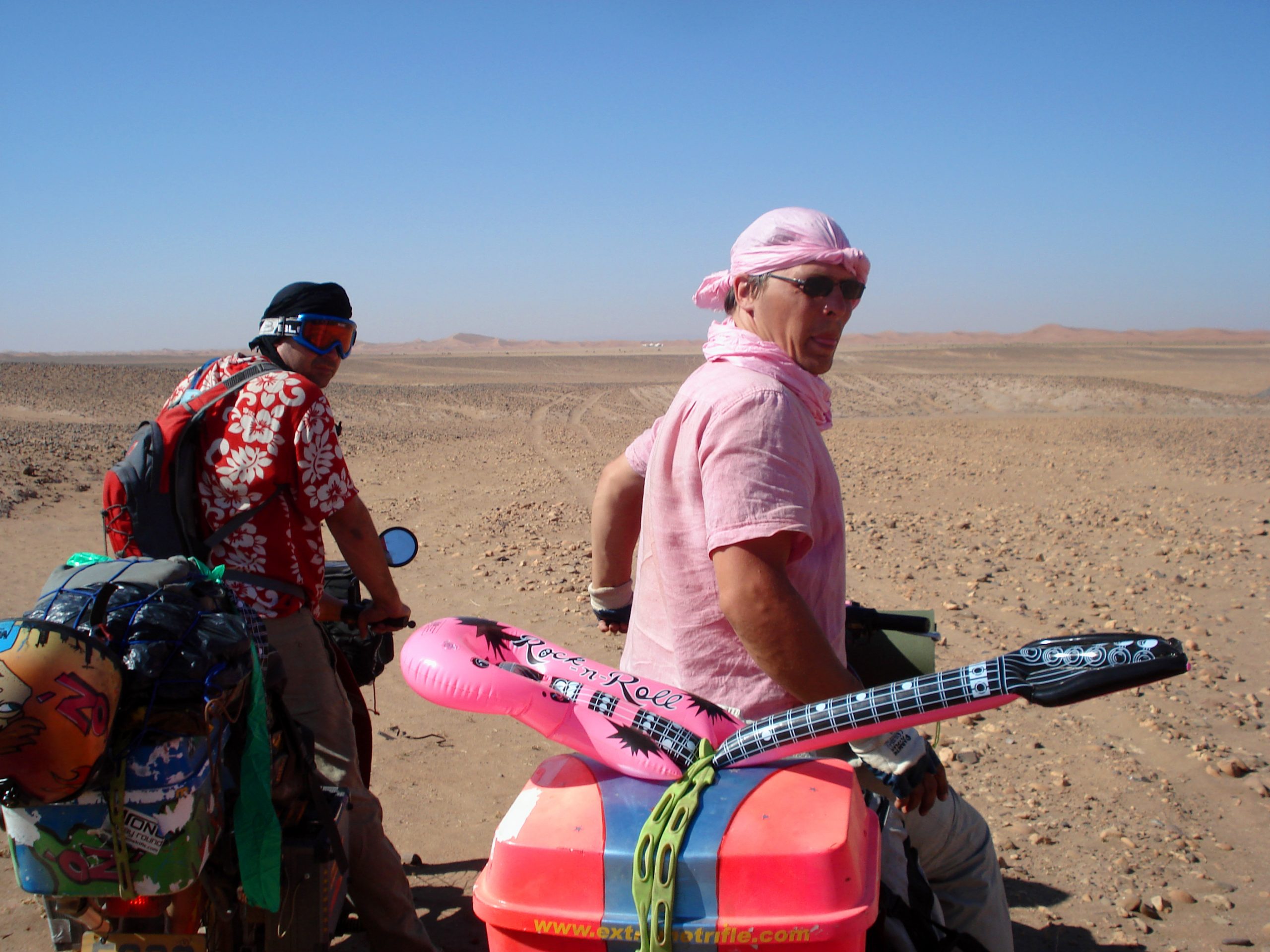 Rising before the sun

We set off at first light with a plan no more sophisticated that to keep heading West. Riding for hours across dusty barren plains, eventually the terrain began to get rocky. We were gradually leaving the open desert behind and getting closer to the Draa valley. Or so we hoped.

Now the going was tough. The bikes didn’t have enough suspension travel to cope with this terrain and we ended grounded out everywhere. Worried that we might put a hole in a sump we decided to walk the bikes over the boulder fields. There were a couple of lonely looking trees up ahead.  We decided to stop and make the most of the shade, which we all needed, but Greg desperately so.

Greg was a little further back  but still making progress. As we caught our breath Charlie crouched down, sighed despondently and put his head in his hands. The empty space on his bike where his pannier full of clothes used to be, was an empty space again. This meant all our spare water was now missing.

As we stood contemplating this disaster, Greg had stopped about fifty metres away. He’d got off his bike and appeared to be looking at his feet. “He’s found the bag of water!” we thought. But curiously Greg just stayed in the same position staring at his feet. Fearing the worst Charlie walked back to check on him.

It turned out Greg had not found the water. His bike had cut out and he had exhausted himself trying to get it started. Charles got the bike going and set about our disaster recovery plan. We put Greg in the shade and Oz stayed with him.

Meanwhile Charlie and Kaspars headed back the way we had come to look for the lost water. Half an hour later they returned. With nothing.

Our favourite tree in the world 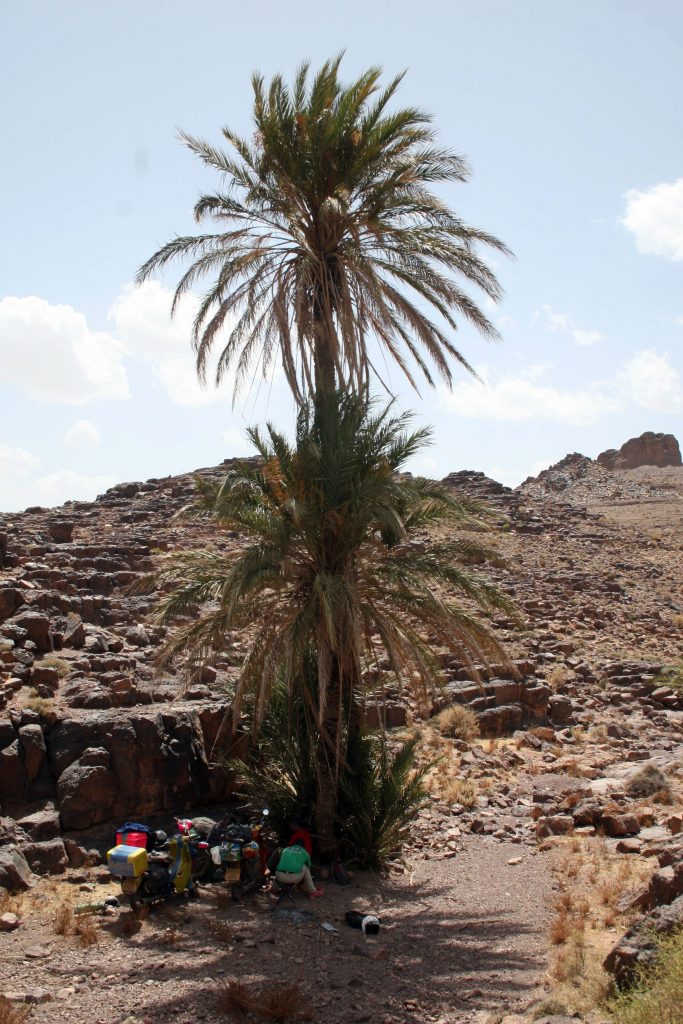 You could not put a price on that little patch of shade.

This was bad news in any circumstance but Greg was already at a low point. He simply wasn’t in the right frame of mind to deal with it. Within minutes he was hyperventilating and approaching a state of panic. We tried to keep him calm, sat him down and lied that we weren’t far away from help. Then he started dry retching.

We considered our options. The light was fading and it was near impossible to ride in those conditions without risking an accident. We’d been drinking freely from our Camelbaks thinking that we would just top up from the spare water. Of which we now had none.

We did a stock take. Five litres between four of us and it had to last all night and as long as it took us to find more water. The next day?  The day after?

Our only option was to pitch tent and try to sleep. The theory being that if we were asleep we wouldn’t drink anything.

Lying in our tents with mouths like a ricecake, all we could think about was water. And ice creams, and fresh orange juice. Suddenly the Sahara desert felt oppressive and claustrophobic.

“What would Bear Grylls do?”

“Drink his own piss probably” 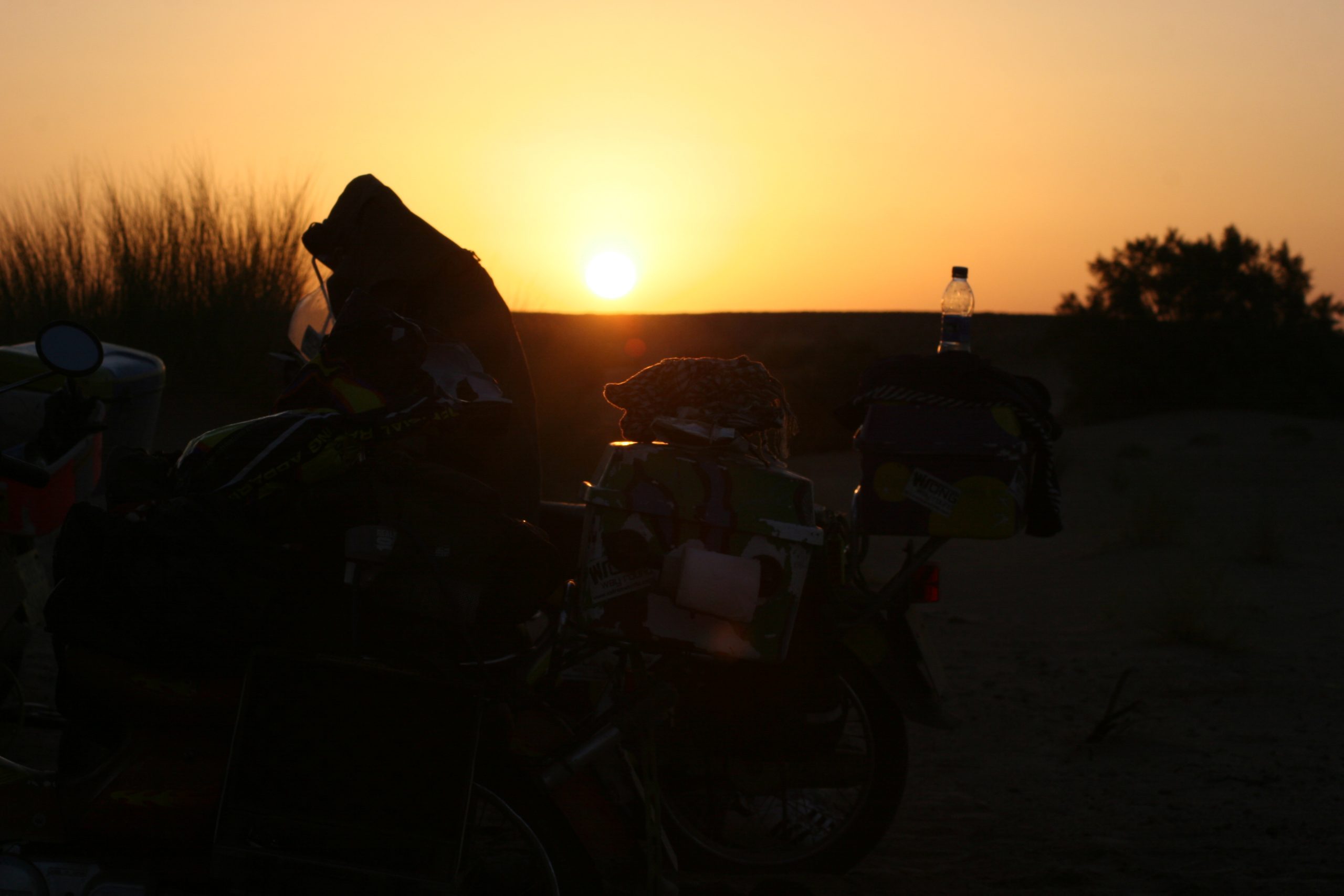 That was a long tough night. As we packed the bikes Charles found the pivot bolt for his front suspension hanging out. It was a miracle it hadn’t come out completely. To everyone’s amazement Oz had packed a spare nut that fitted exactly, by pure fluke obviously. A small but important victory.

We were now down to about half a litre each of water. The early start gave us a good six hours until the midday sun would come back to haunt us. Greg was on autopilot, unable or unwilling to speak but able to ride. We kept him in front of us so we could keep an eye on him. Progress was slow but steady. More rock, sand, dust and the murderous desert wind.

The next small victory registered as we converged on a well worn track. It had to be going somewhere. With this welcome boost Greg was suddenly doing Paris Dakar pace.

With sheer bloody mindedness we were motoring on. Greg began to slalom wildy, riding with both feet on the floor as if he was trying to stop the bike falling over. Catching up to him quickly we found him riding on a completely flat rear tyre. He knew it was flat but in his confused state he demanded to continue. He then began shouting repeatedly that we had to get out of the desert.

We had to literally lift him off the bike as a broken wheel would mean we were all fucked. Absolutely the shittest moment for a bastard twatting puncture.

Tyre fixed, we smashed on again. Ten kms, another 10kms, another 10kms… It was hard to make out at first, and we weren’t entirely sure if it was mirage or a hallucination, but as we got closer you could definitely make out the shape of what looked like a fort.

We got close enough to realise it was a fort. Home to none other than the French Foreign Legion. And they had water. Cold, cold water. It was without doubt the best tasting drink ever to pass our lips.

And it got better. They had showers, beer and food. Not even the moment when Greg caught his own vomit in his hands (only to then throw up through his nose) could take that luxury away from us. 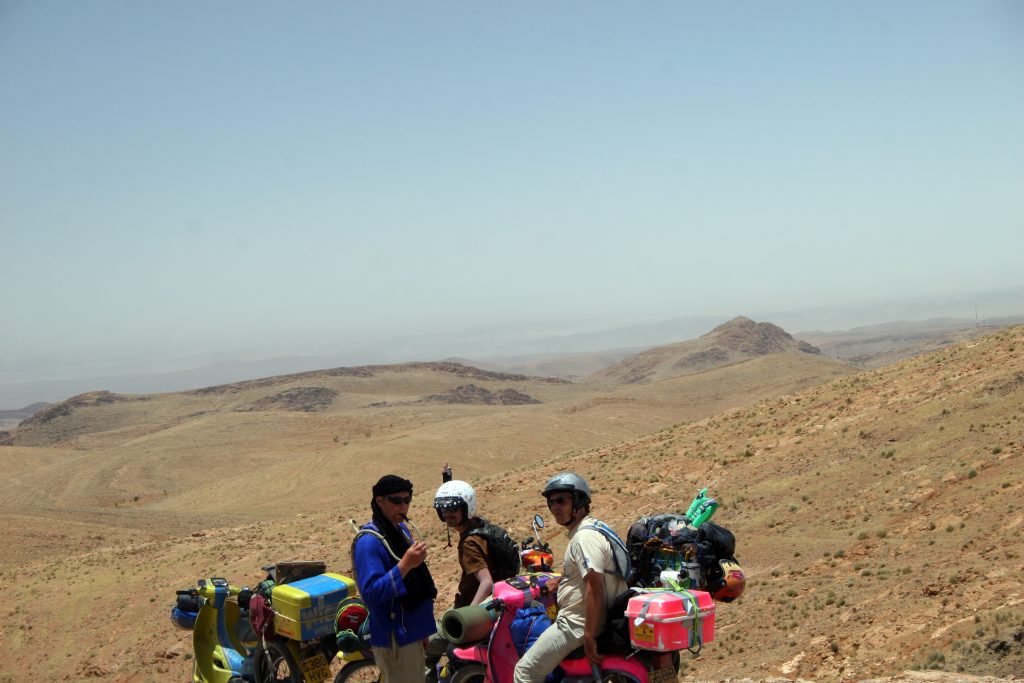 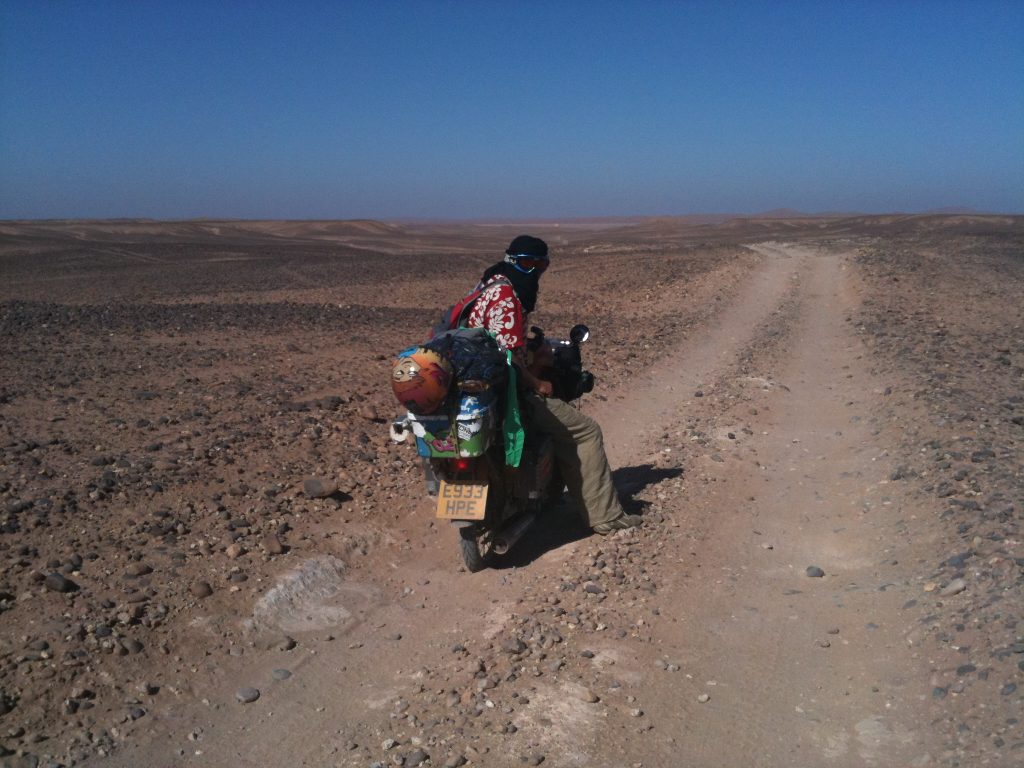 The path to salvation 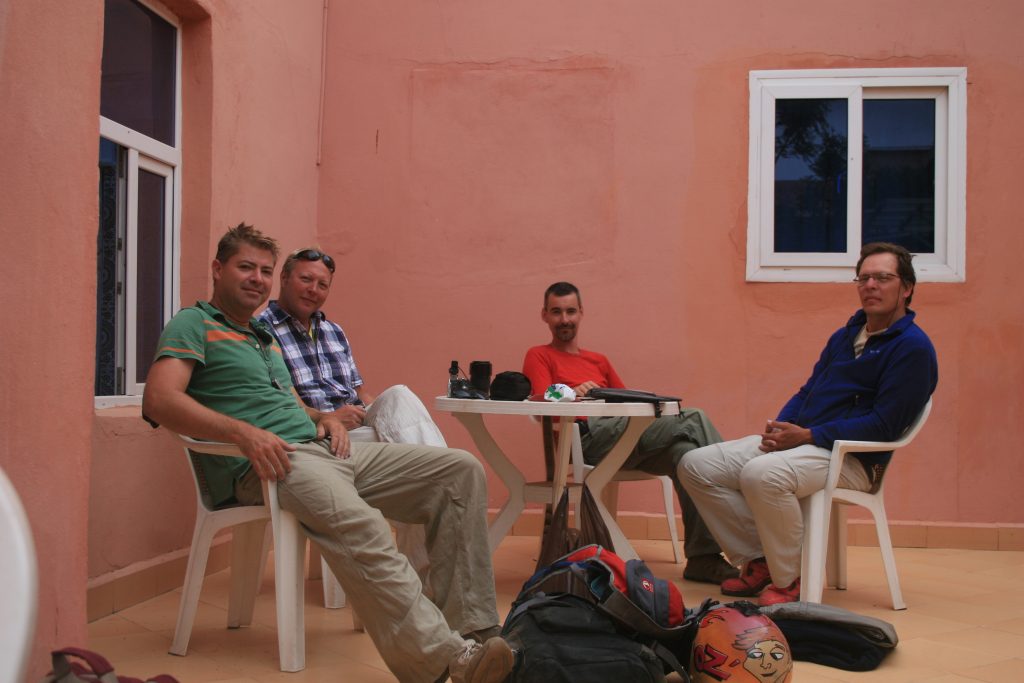