Part 5 - It's scorching. Let's do coffee

After dinner Greg quietly rolled up his trousers. Upon seeing his purple leg we had a fleeting moment of sympathy before ignoring his whinging. It was his own fault for crashing.

There is nothing quite like a real bed for the night to rest weary bones. To wake to a breakfast of coffee and pastries was an added bonus.

The plan today was to cross the High Atlas mountains all the way to the mouth of the Dades Gorge.  The route through the mountains was nothing more than a dirt path more frequented by cattle than vehicles.

Feeling like VIPs we smugly wheeled our bikes out of the restaurant, returning soon after to wipe the oil off the tiles. With the bikes all packed up we headed off to refuel during which time the whole village lost power. No power = no working fuel pumps.

The options were either to hang around waiting for the power to come back on or set off with only the fuel we had on board and hope we didn’t end up stranded in the middle of the mountains.

After a group discussion we decided the sensible option was to wait for the power to come back on, so we ignored that and steamed off up the mountain. 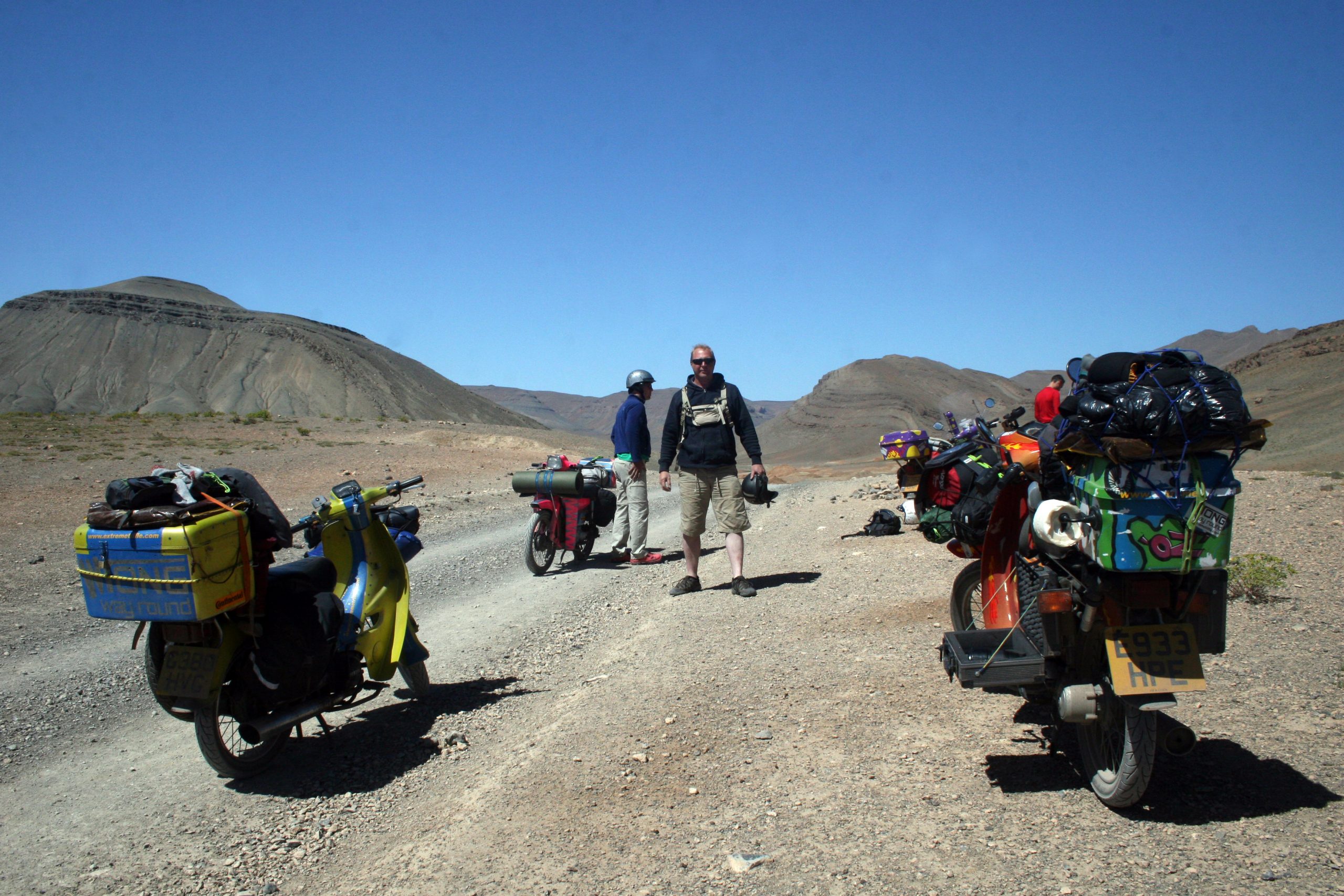 A lovely day for a picnic

Imilchil is over 2,000 metres in altitude and our route through the High Atlas would take us to over 3,500 metres (due to a slight navigation error).

With temperatures at night plummeting compared to the daytime we really didn’t want to get stranded overnight.

Our tactic was to keep a slow and steady pace using as little fuel as possible. Unfortunately, conditions conspired against us. The track was strewn with rocks and was so bumpy that trying to maintain throttle control was like trying to not spill your pint on a bucking bronco. On top of that the gradient was so steep that we had to drop down to first gear and generally nail it to get anywhere.

On the plus side the scenery was amazing, only spoilt by the fact that if you took your eyes off the track long enough to marvel at the surroundings you either hit a rock and fell off or got vertigo and fell off. After a couple of hours of steep ascent we crested a summit to be greeted by a view all the way down the valley as far as the eye could see. All the way to the Sahara itself. In the face of such an awe inspiring panorama, we decided it must be time for lunch.

From here on in “lunch” took on a new meaning. We now had to carry food impervious to both scorching temperatures and being rattled around constantly on the back of the bikes. We needed sealed or dried food with a half life of several thousand years. Or put another way, Lithuanian army rations.

Kaspars had used a contact to secure us a job lot of army rations, the only problem being that with the ingredients written in Lithuanian we had no idea whether we were eating tuna pasta or depleted uranium. You have to be slightly wary of a brown stick that looks and tastes like chocolate but which doesn’t melt at 40 degrees. And so the daily ritual of “Ration Roulette” was born.

A less than helpful roadsign 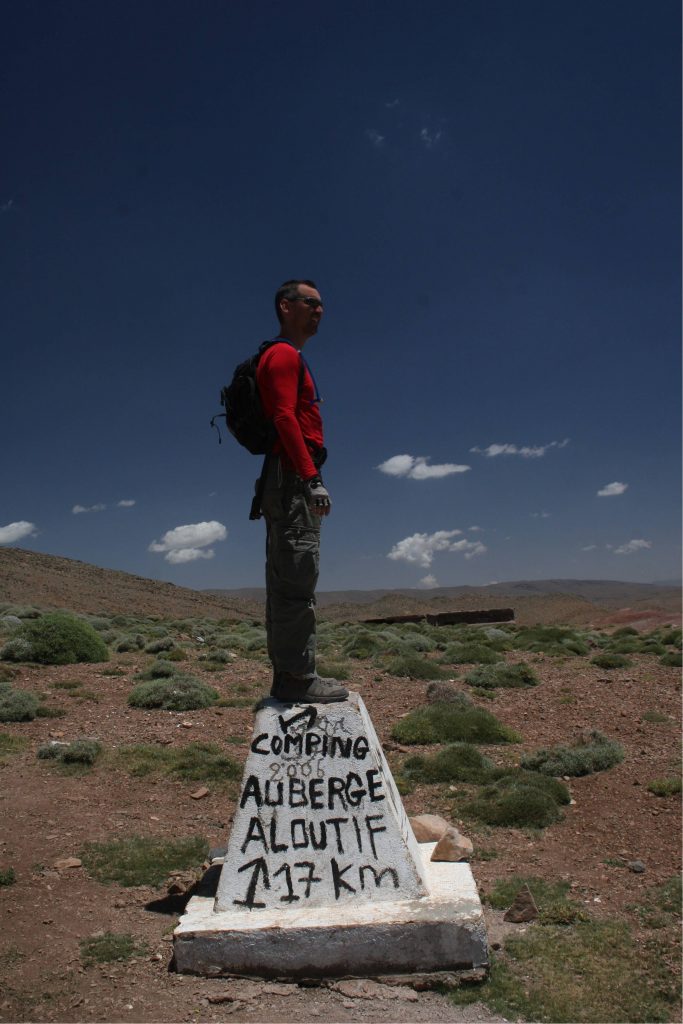 We are not alone

As scenery goes, it was one of our more impressive lunch stops. Whilst unpacking the food and firing up the petrol stove (having momentarily forgotten we were supposed to be conserving fuel) a goat herder appeared.

It never ceases to be a surprise that no matter how remote you think you are someone appears from nowhere, or in this case from behind a rock. If it had taken us three hours to reach here by moped and we hadn’t passed a single house, where the hell were he and his goats going?

Bizarrely the only other humans we’d seen all day were three lads from Manchester in a Volvo coming the other way. The herder eventually meandered over and climbed on Oz’s moped.  He asked us to take some photos. We did. He then demanded we pay for the photos. We didn’t.

He then switched his attention to the contents on the stove. After a few nods and the motioning of his fingers in to his mouth we got the jist that he was hungry.

We offered up our selection of sealed foil bags, something which he seemed delighted with until he actually tasted it. With a gag, followed by a spit, the half chewed contents of his mouth sat glistening in the sun.

He wiped his mouth and shuffled off without saying anything. Obviously not as hungry as he made out then if he could afford to be picky about it. It was only after he’d gone that we realised he’d picked out pork meatballs in beans. 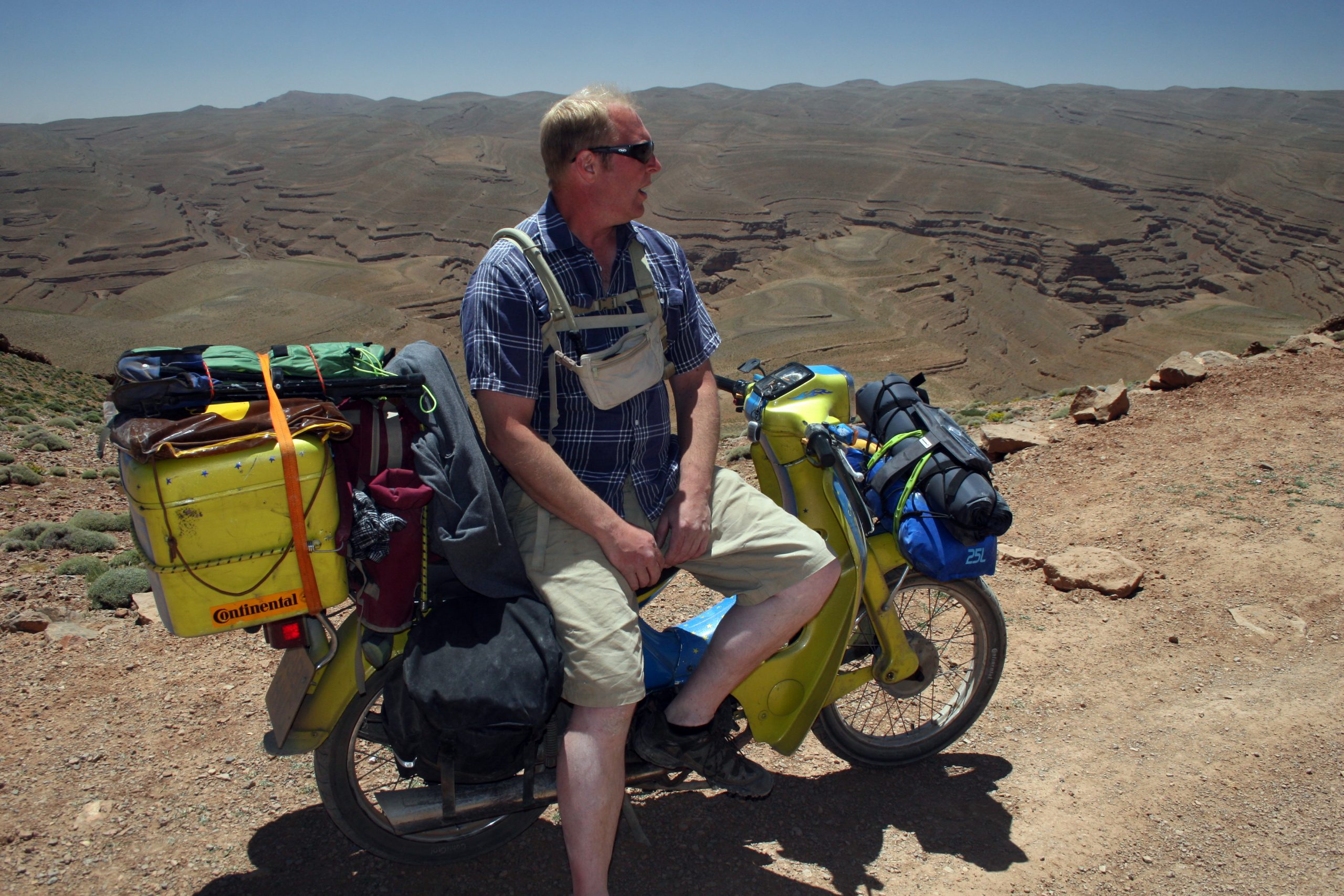 This did raise the question though, how does someone who doesn’t eat pork know that they are eating pork? Anyway, we rid ourselves of any guilt by blaming the Lithuanian army for not writing things in English.

After a hearty lunch and a quick check round the bikes to check that nothing essential had fallen off we pressed on towards the horizon as the temperature continued to soar. By mid-afternoon we were really starting to flag. The combination of the terrain, heat and dust was tiring on the body and the eyes and the problem was there was absolutely no shade of any description since we were now well above the tree line.

Is it a mirage?

Enter, Hotel Tizi, a “hotel” of such randomness that it wouldn’t have been all that surprising if it was staffed by pandas. Located on a mountain top, it was hardly a prime High St location. At best, that day they would have had passing trade from us and three blokes in a Volvo.

We were enticed in by the thought of an ice cold Coke but alas although they had a fridge with a plug on it, there was no plug socket to put the plug into so it was basically a cupboard with a glass door. We asked for water but they explained the water had to be boiled. In that case we may as well have a steaming hot coffee. 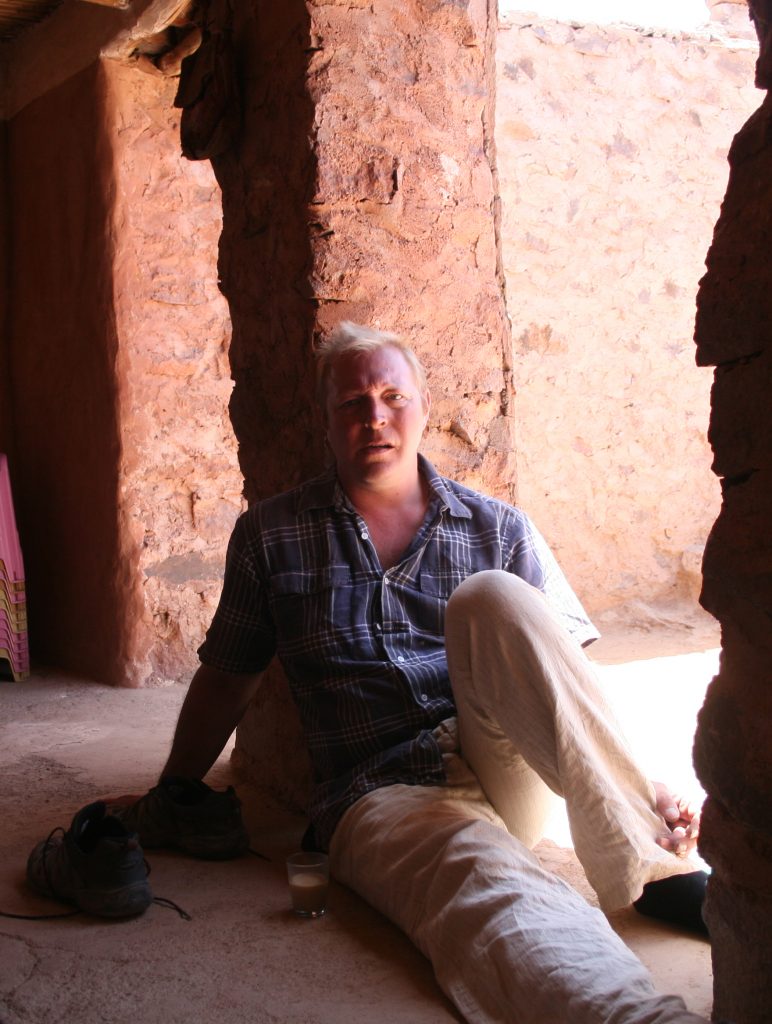 And a fan would be good

In the circumstances it was not as horrendous as it sounds. To be honest anything that wasn’t warm water from our Camelbaks was a welcome change.

The combination of caffeine and 18 sugars was actually a good pick me up. Oz even produced a packet of biscuits from his battered panniers. The ingredients were questionable seeing as none were broken and yet the camera they we next to now had a broken screen.

We stuffed the whole packet of biscuits and one gorge led to another. The Dades Gorge.

Our pit stop had set us up for the remaining four hours or so it would take us to descend down to the mouth of the  Gorge. But what a ride. That is a route you could do repeatedly and never get bored. They even chucked a bit of tarmac in for our pleasure.

At the bottom as we got low enough to be in shadow the temperature cooled and we took the opportunity to wade into the cold refreshing waters.

We set up camp nearby ready for the final push towards our ultimate goal, the Sahara desert, where events, including the temperature, were set to go up a notch or two. 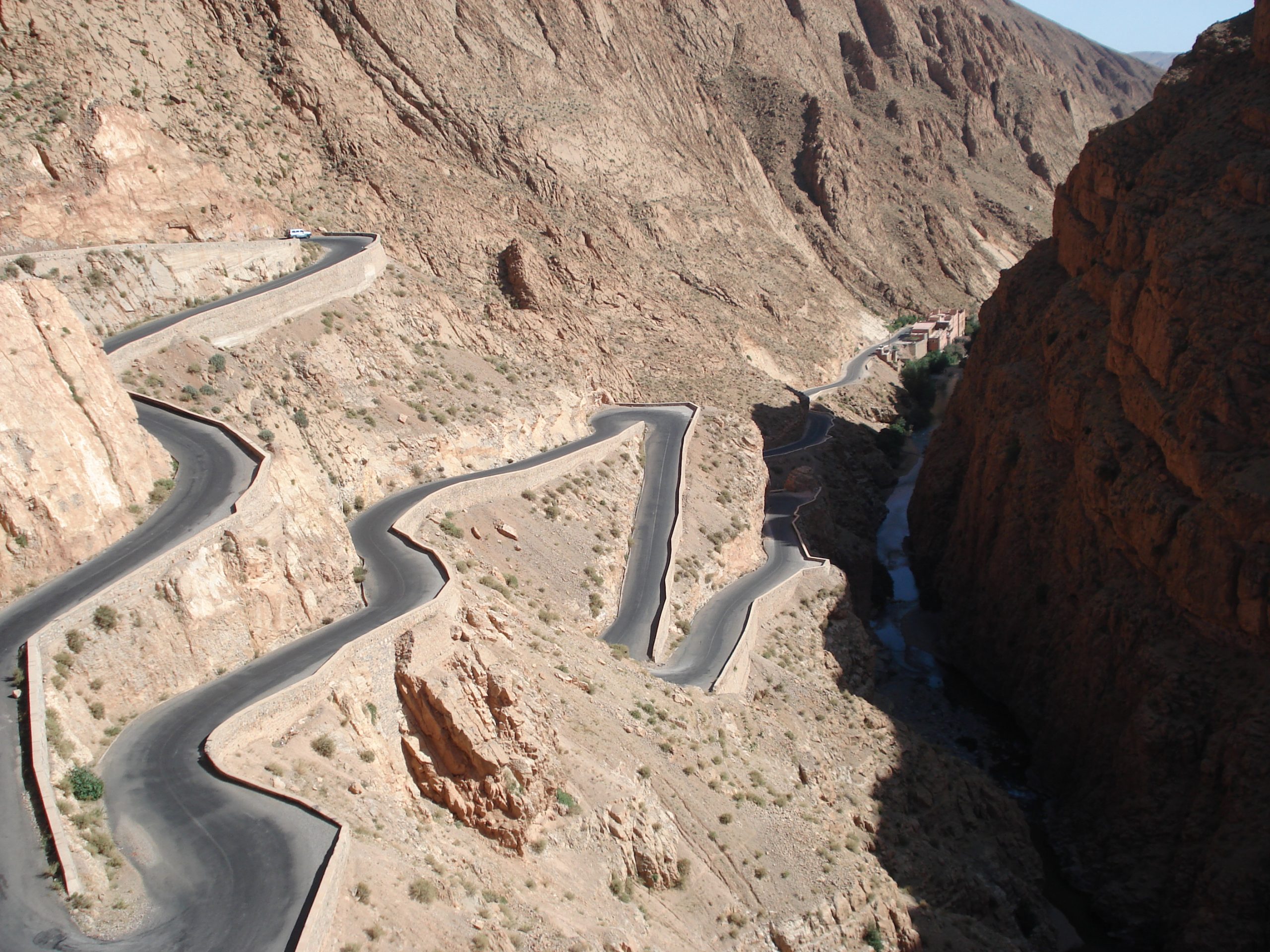