We had all agreed that this trip would not be the fustercluck that was the fate of the original Wrong Way Round. On that occasion things got off to a bad start on our very first overnight stop.

Evel Knievel is in the house

Such was the build up of excitement of finally being on our way that late into the evening we decided to perform an impromptu moped stunt show for our fellow campers at the Assen Moto GP (even though they didn’t ask).

The campsite is probably still strewn with pieces of indicator lenses, brake levers and the entire contents of Nick’s garden allotment.

If you are not familiar with the first Wrong Way Round trip that last bit won’t make any sense. Never fear, making no sense is a common theme here.

The net result was that A NEW RULE was introduced for Wrong Way Round Sahara, giving us a grand total of one rule. NO STUNT SHOWS UNLESS SOMEONE ASKS. 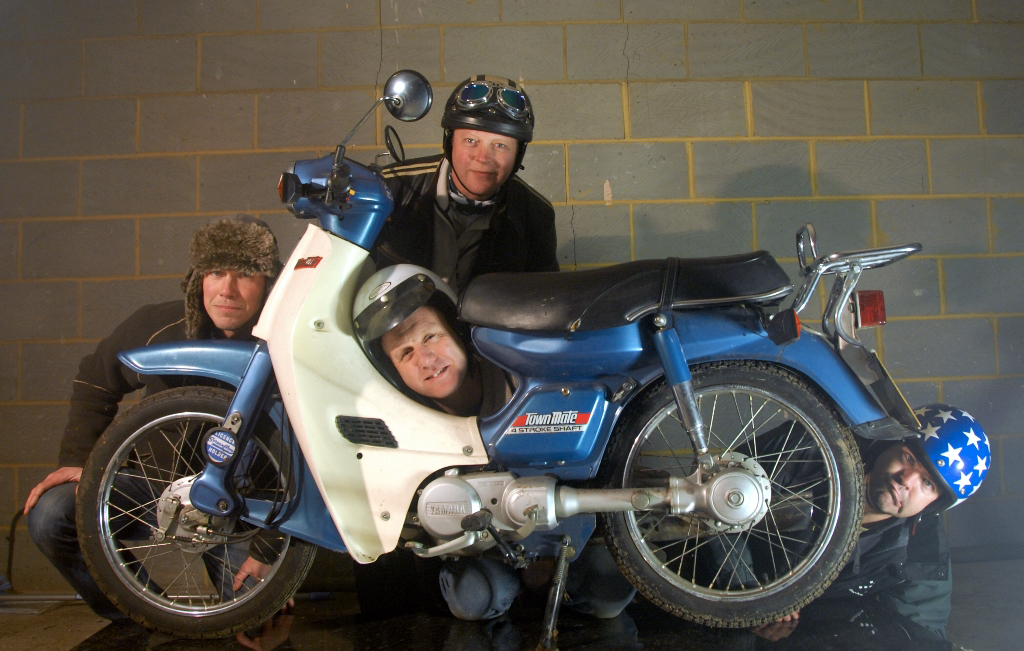 As our departure date was still some way off we had the opportunity  to fill in our need for moped action by taking part in the annual Mopedathon endurance race hosted by RAF Wittering.  We’d done the event several times before and considered it a good off-road training opportunity.

When we say “training”, mean “twatting about”. A 6 hour endurance race in fancy dress, and quite a lot of drinking afterwards.  What is not to like.

The “Bike of Shame” was sitting on Charlie’s trailer having been giving a total makeover in the paintshop, ready to be transported back to HQ. In keeping with our meticulous trip preparations, we had to resist trashing it.  Instead we had brought a Honda Melody that had been festering in the garage at HQ for 3 years.

According to Matt “it used to work“. That was reassurance enough for us.

Get the kettle on

We’d got the bike going the day before the race. After a trip to the end of the drive and back it was declared that the bike had demonstrated full race capability. Unfortunately the Mopedathon racetrack is a tad longer than the drive. Long enough for us to realise that the Melody was incapable of reaching the manufacturer’s claimed top speed of 31 mph.

We looked on in a huff as every other team bombed around having a laugh while we stood despondently looking at our asthmatic pink turd. It was no longer just slow. It refused to start. In times of despair a cup of tea is in order. We rustled up a brew and sat down to watch the race. This brightened our spirits. In what other motorsport event can you watch King Kong take out Wonder Woman on a hairpin bend.

As the day wore on we were faced with a growing dilemma. The Bike of Shame was as fast as anything else out there and we couldn’t bloody ride it for fear of wrecking it just weeks before the trip. In order to put it beyond temptation we lent it to a race marshal so that they could use it as a safety bike for removing objects from the track. Like mudguards and bodies and stuff.

The toilet roll was the fastest bit 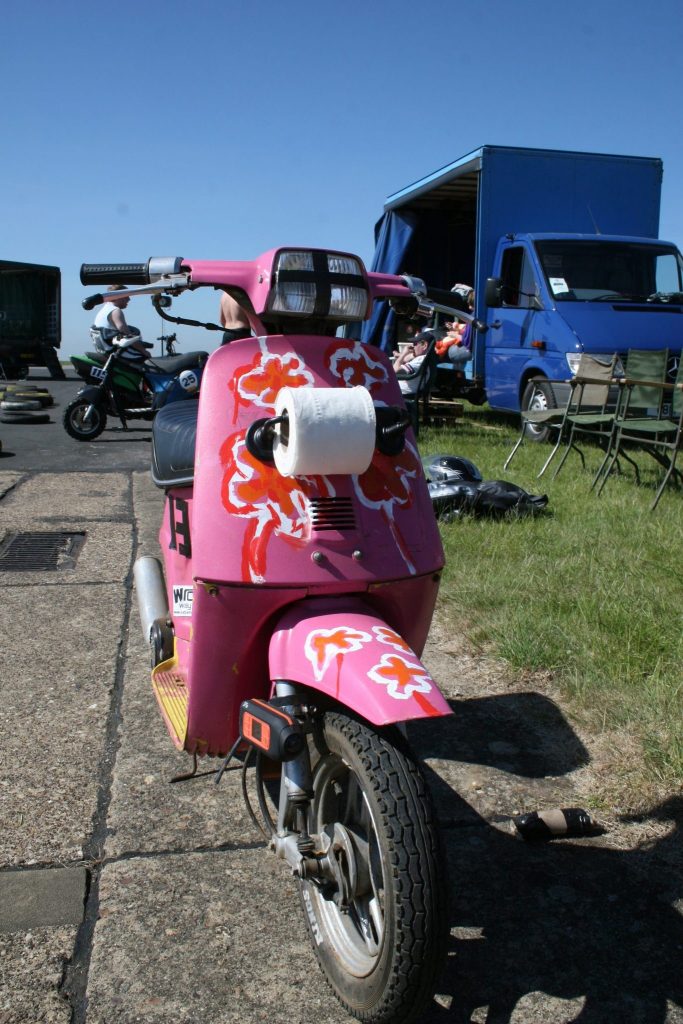 I spy a commotion

At least the sun was out and someone had opened the Jaffa cakes so things were looking up.  In the distance there was some commotion as marshalls went running towards a tyre wall.

Amidst a cloud of slowly rising dust a pink thing was on its side. It looked like a Tellytubby had been taken down by sniper fire. There was general hilarity and shouts of “someone’s binned it”. We gleefully joined in the piss-taking until it we realised it was Kaspars’ freshly painted bike.

Unbelievable. It would have been bad enough if we’d crashed it ourselves but this was even more galling. We were deflated once again and not at all looking forward to the awkward conversation that was about to happen.

We don't even need the touch up pen

A sheepish looking marshall walked towards us, pushing the bike with a bowed head.  At least the wheels were going round. We did mental calculations of the likely crash damage but the closer it got, the better the bike looked.

The rack that Charlie had fitted over the front mudguard to hold a tent and sleeping bag had taken the brunt of the crash and the paintwork was untouched. We were so deliriously happy that we immediately celebrated by removing all the bodywork from the bike and ragging the arse end out of it for the remaining 5 hours of the race.

All it needed afterwards was new forks, a new rear brake pedal and a new set of handlebar grips. We didn’t tell Kaspars. 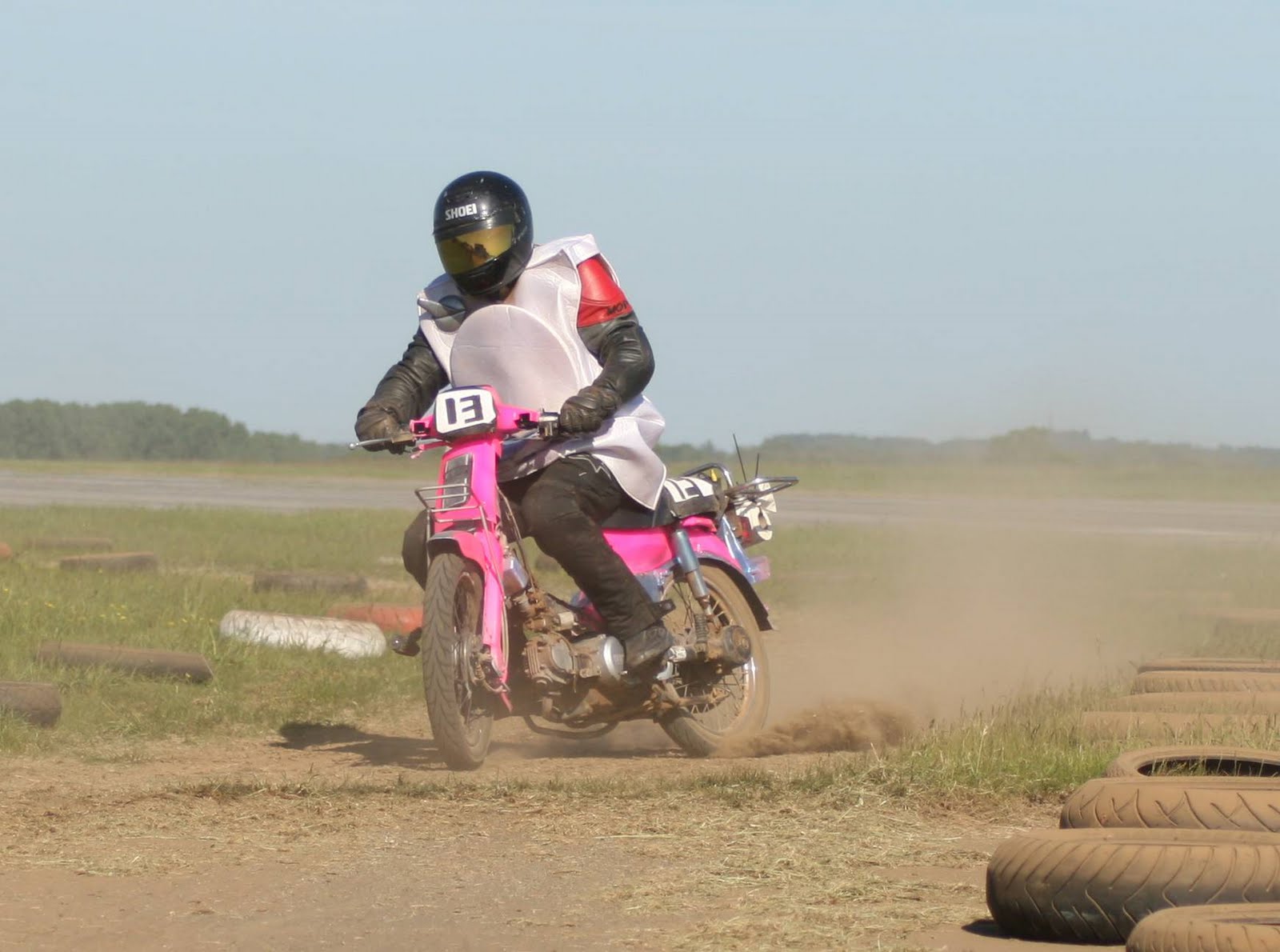 Calling a trip the “Wrong Way Round” was always tempting fate. About the only thing we got right was the prediction of something going wrong. The plan was all going to plan until we got the news. Matt had finally gone to see the doctor after spending a few weeks failing to put on his own slippers.

The diagnosis was that a life of banger racing, drunken trampolining and generally dropping himself on his head, had not been kind to his back. Suffice to say, the doc was not impressed with Matt’s intention to ride a moped for 7,000 kms off-road. Rubbing in a bit of Deep Heat was not going to cut it. With spinal surgery on the agenda Matt was grounded.

An emergency meeting was called. It was important to keep the numbers to four since that meant never having to leave someone on their own. We debated who we could call who would easily buckle to peer pressure and agree to come.

Greg was raring to go, so much so that we wondered whether he’d misheard us and thought we were heading out for “dessert”. He was also seemingly unperturbed by the fact that he did not possess a bike licence. Mind you neither did Kaspars, a fact he admitted on the day we were leaving.

Matt nobly handed over his beloved “Purple Peril” in the full knowledge that a blind chimp is marginally better at riding a bike than Greg. To add insult to Matt’s injury, as he waved us off through gritted teeth, the headlights on the Transhit packed up. We sat around drinking tea while Matt fitted a new switch.

This is the best we could do 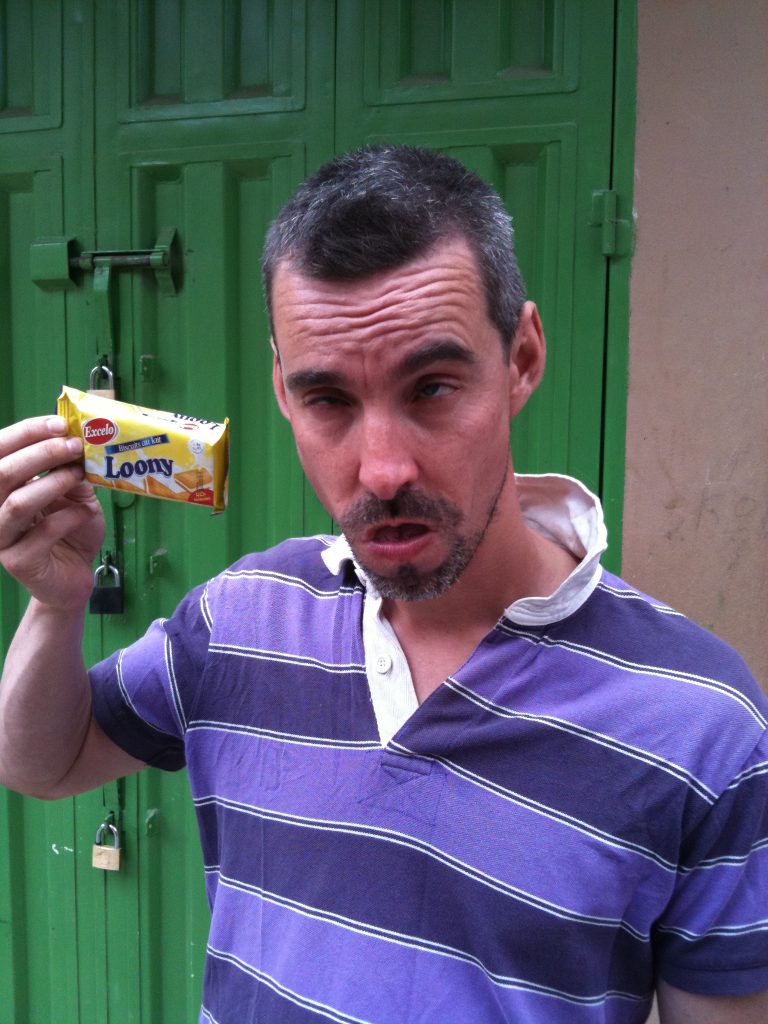 At least his mum had washed his pants

NextWrong Way Round Sahara Part 2Next