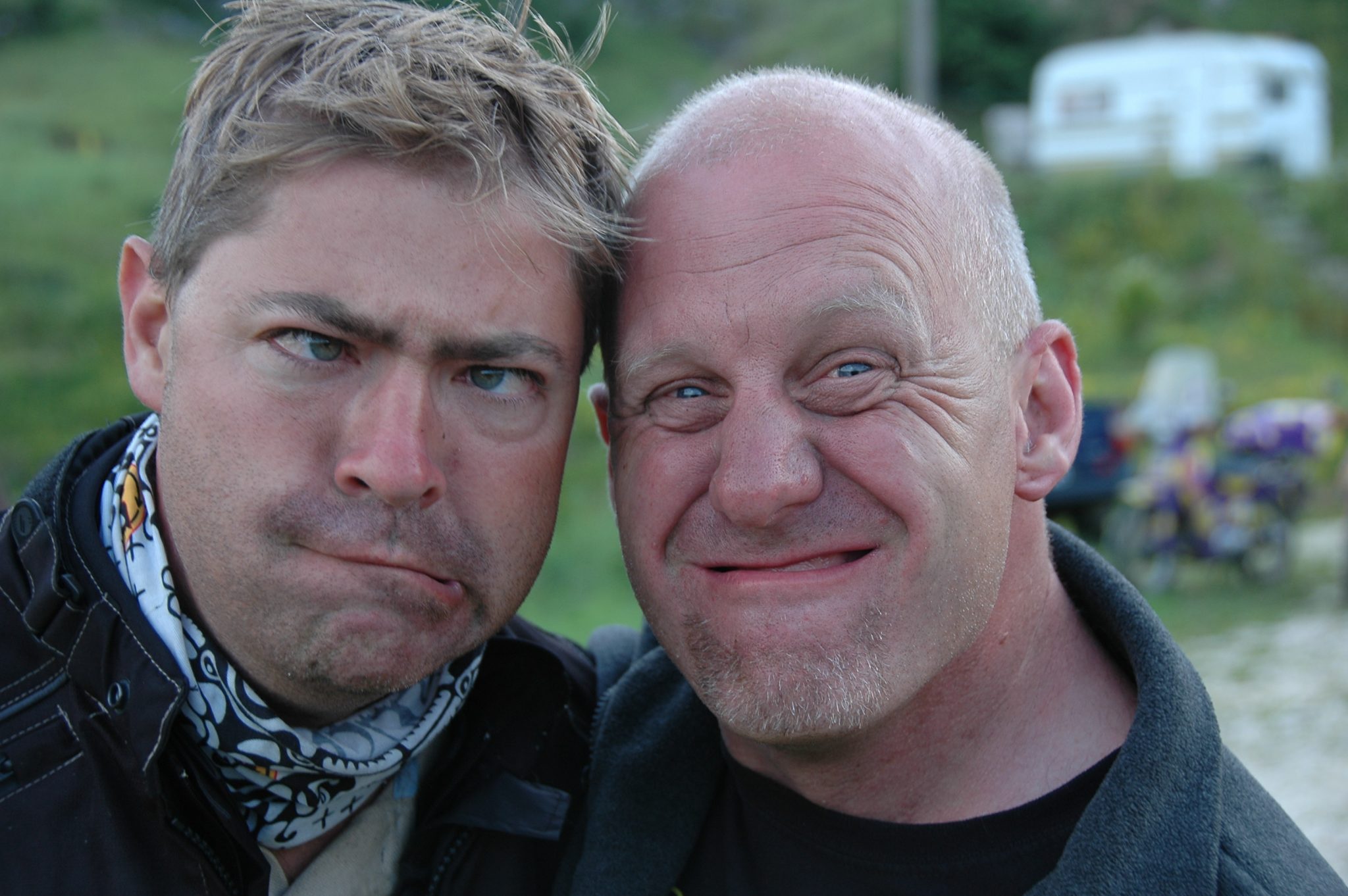 Man with big hat says “No”

All great adventures have their highs and lows. Moments of jubilation and moments of utter despair. It may not seem like it at the time, but the breakdowns, arguments, border problems and bouts of rampant diarrhoea, all become favourite pub stories once you’ve actually come out the other side of them.

Admittedly, death might be a low you’d struggle to see the funny side of, or perhaps an unexpected gang rape by wild boars, but when all is said and done, most of these moments are what make adventures an adventure, else they’d just be a trip to the shops.

So far, the highs and lows had been coming thick and fast. There was the high of our chance meeting with Russ Malkin which led to an invite to Long Way Round HQ, followed by the low moment when we got there and realised that neither him nor Charley Boorman had remembered, followed by another high when they both turned up anyway by sheer fluke.

There was the low when we realised our own new HQ had no toilet facilities, only for us to land a sponsorship deal with Shit Box. The high of reaching the first 1,000 cans on the Stella wall and the low of Charlie passing his bike test which denied us a rich resource of piss-taking opportunities.

And once we were on the road the roller coaster just cranked up a level. No sooner were we smoozing in the complimentary P&O Club Class ferry lounge, than the morning papers were telling us the great Michael Jackson had snuffed it, and not even in a good way. Just your average overdose of painkillers, anti-depressants and monkey sperm.

Then in Assen we missed our long awaited photo shoot with Suzi Perry only for the gloom to be lifted by the Dutch police officer who failed to clock the support van was RHD and promptly breathalysed the passenger.

Then, two lows in quick succession. Nick’s engine failing followed by the realisation Oz had packed the wrong spare engine. But matter not, cos you always know it’s going to be followed by two highs, which incidentally were the Hungarian camp site owner’s home made Palinka and the fact that Nick could start the spare engine in less than 12 kicks.

Then a high in every sense. The 2,000 metre altitude Transfagarasan Highway which we not only conquered, but we also overtook a moving car on the way down. In fact it was almost too good, as Nick’s bike didn’t even blow up. And then it just kept getting better. We popped in to see Dracula, the sun didn’t stop shining and then we fluked across the most stunning campsite in Transylvania.

This inevitably meant the balance would have to be redressed the next day. Perhaps it would piss down, or someone would crash. But the day dawned to beautiful sunshine so that wasn’t it. Nobody crashed so that wasn’t it. And then we reached the Moldovan border…

Bear in mind this was the first “proper” border. Up until then the borders were all EU countries so the only way you knew you were in another country was the need for new currency and the police wore slightly different hats (which by the way get bigger the further East you go). We were fully anticipating that by the time we reached Kazakhstan the Chief of Police would need scaffolding to hold up his brim.

This however, was a proper border, with proper barriers and proper guns and the first occasion when we needed to produce our documents.

Passports: Check.
Vehicle registration documents: Check*
I do not have Swine flu declaration: Check
No we are not smuggling cigarettes and vodka: Check

* the man with the medium-sized hat points out he has five passports but only four registration documents. At the same moment Charlie is seen sloping off and hiding behind the van. After being summoned by the guard, Charlie confidently explains that he doesn’t know where his V5 is but he can remember what it looks like if that helps.

Cue man with larger hat and more stripey bits on his shoulder pads. “No V5, no entry”.

At this point we resign ourselves to the fact that this is going to involve a complete search of the van, and most worryingly, dangerous exposure to over-worn socks and underpants which have thus far remained in quarantine in the remotest corners of the van. We roll our sleeves up and get stuck in when to our relief Charlie reveals that he knows where his V5 is.

Words failed us. Apart from a few beginning with “F” and “C” and. The irony was that Charlie had been scanning his V5 on to his U-tag, a USB device designed to help you retrieve copies of all your important documents in case of loss. Unfortunately an electronic version of a V5 was not going to cut it with man in big hat.

The reality was we were going nowhere with that bike. We considered our options. We could run the border. That would be great for the video but their guns looked liked they worked so we discounted that idea. We could smuggle the bike back through the next day by cunningly hiding it on the roof where no one would ever look. Except that was one of the first places they had already looked. And so the harsh but grim reality was that we were going to have to ditch the bike.

Now ordinarily that wouldn’t be a complete disaster. We could just buy another one. Except that nobody else in Europe imports Yamaha Townmates. Well apart from Albania which says it all really, but that would mean a detour of over 2,000kms and put us behind schedule by 2 weeks which was just not going to happen. Instead Charles was going to have to do a Claudio and get himself a different bike.

At this point it was looking like one of those lows that was going to take a long time to be funny, like Bobby Davro. We retreated back to Romania, stripped the bike down for spares and contemplated our next steps. Whatever happened there was no way we were turning round. The next morning we got up and went back to the border. It was a change of guard but they knew all about our failed attempt the night before. Typically they didn’t search the roof so we could have smuggled the bloody bike in after all.

PrevPrevious PostA road only a Dictator could build.
Next PostWhy are roubles coming out of the wall?Next

Find out more or adjust your settings.