It’ll be like last time. Only wetter
Walkie-talkies – brilliant when on
Goes by the name of Death
Stick a finger in it
The Highway Code is AWOL
So diesel is the green one
Drinking whisky driving risky

Walkie-talkies – brilliant when turned on. 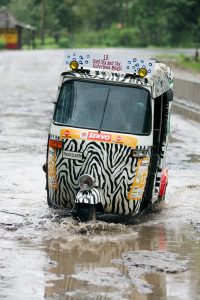 A roadside breakdown is never a welcome experience, least of all when it’s raining so hard it’s painful to stand out in it. We’d got split up from the main group a few kilometres back after stopping to take pictures. In our haste to catch up we gambled with pothole roulette. The wheel of fortune unfortunately stopped in the wrong place. The thud was a ceiling  smasher.

We now had an inch-wide hole in the bottom of our gearbox. As we stood around wondering what to do a small scale environmental disaster was unfolding around us as oil leaked away into the torrent of brown flood water. At least it gave off a nice rainbow effect.

Evidently during monsoon flood it’s impossible to tell whether the standing water is a mere puddle, or a foot deep crater. The one we had just smashed in to was the latter. Jim was relieved his cameras were still intact. Oz on the other hand was slightly miffed that he’d headbutted the on-board DVD player and knocked the screen off it’s mountings. He was only half way through “Ghostrider” as well. Maybe Nicolas Cage’s “acting” had offended Shiva and this was divine retribution.

We might as well have been shouting into a naan bread

We had no mobile phone signal, and the other teams didn’t have their walkie talkies switched on. It was for this very situation we brought the walkie talkies in the first place. As things stood we might as well have been shouting into a chicken drumstick.

For an event like Monsoon Madness though this all came with the territory.  This was day two of a seventeen day trip. We were taking part in the first ever coast to coast race across India in auto-rickshaws, in the monsoon season.

In layman’s terms we were wading through a 2,000 kilometre long pool of mud and poo in a motorised shopping trolley with no doors and a rag top roof.

As was the case with Rickshaw Rampage (the first ever auto rickshaw race), the opening party was hosted by the Rotary Club of Chennai. Again, the beer was aplenty. Again, not much can be remembered of the opening party.

> Part 2 Goes by the name of Death