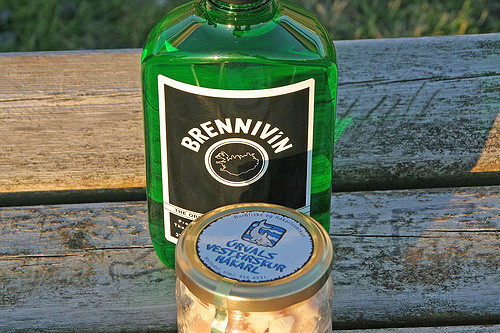 Put it this way, the bar staff wouldn’t even let us open the jar in the bar. Banished to the garden we then set about being accepted as honoury Icelanders. The moment the locals clocked the jar they steadily approached mobile phones in hand with a big grin of expectation. This only added to our nervousness.

For those who’ve never heard of let alone tasted Hákarl then let us put it in layman’s terms. It’s a shark that can’t be eaten when fresh because it’s poisoned with the shark’s own piss. To get rid of the toxins it’s buried underground until it putrifies, hung up to dry for weeks and then chopped into bit size chunks for unsuspecting tourists to gag on.

Of course we actually sought the stuff out just so we could film each other hurling chunks.