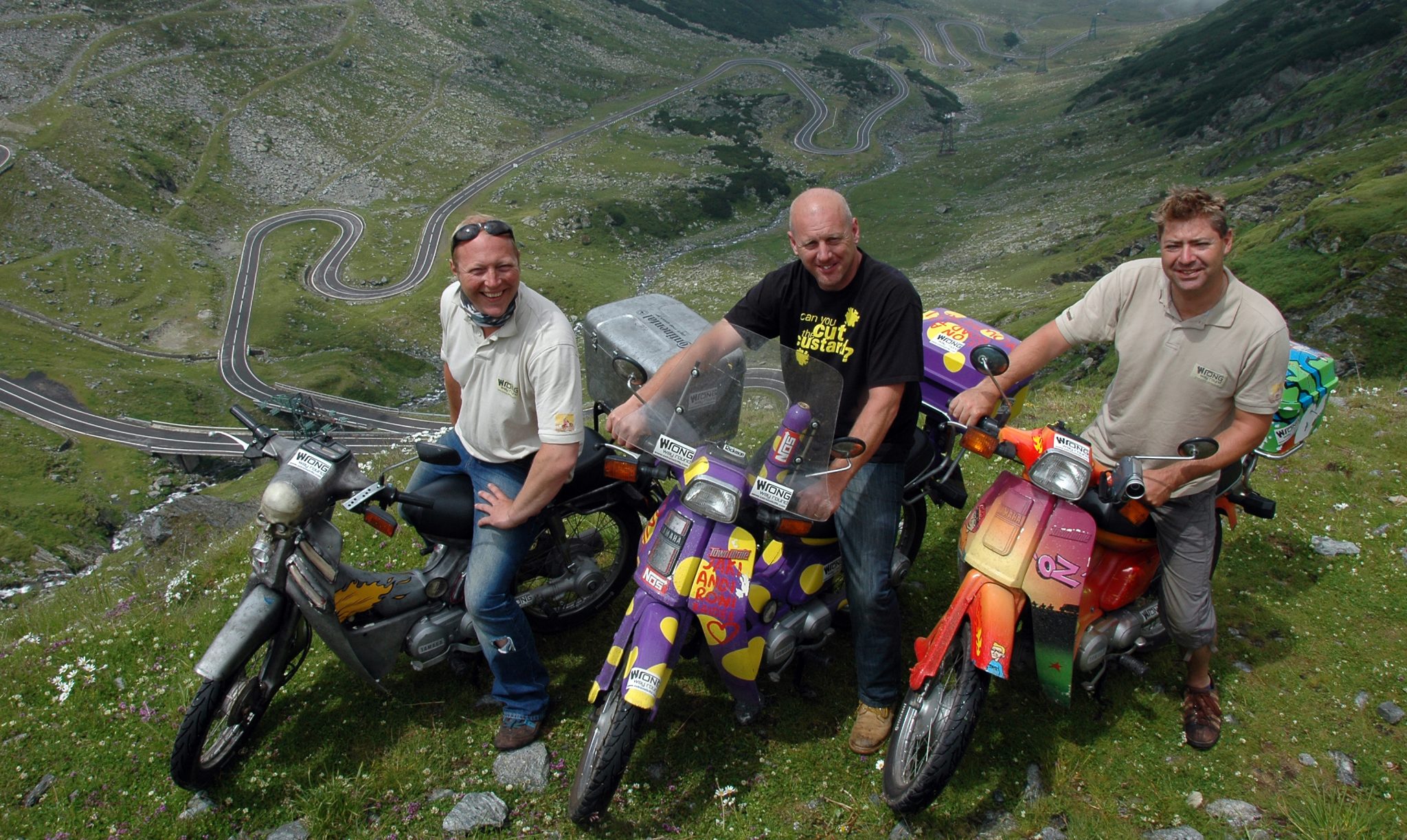 A road only a Dictator could build.

Ever since we tried to reach the Tranfagarasan pass in the Car Trek mission back in 2008, we’ve failed to pronounce it properly. The Transfa..the pass, is a road popular with bikers but usually only once they’ve purchased the entire option list for their GS and consulted Ranulph Fiennes personally.

With Nick’s bike now glugging oil faster than a Glaswegian chip shop, we needed to avoid over-stressing the engine. Top speed was down into the 30s and then only if we managed to draft a passing Soviet tractor. Faced with an incline, Nick’s bike, needed a long stretch to pass even the local horse and carts safely. This was serious.

So we did what any well-prepared expeditionary force would do: travelled a good couple of hundred kilometres out of our way to climb a 2000m mountain pass.

We started down the 92km road and almost immediately the expression on the locals’ ruddy faces turned to one of 10% alarm and 90% indifference.

Undeterred, we sped into the forest that heralded the start of the climb.

With all our concentration focused on the getting the hairpins just right for the camera, we had no time to inspect the glorious views. Which was lucky because the glorious views were behind thick damp cloud. As was much of the road ahead. The treeline gave way to rocks and scree. What lay either side of the road we still couldn’t see. Eventually we got high enough above the cloud to realise that we’d barely got halfway up.

It’s true treacherous switchbacks aren’t so dangerous when taken at the speed of an enthusiastic uphill cyclist, but they are when you’ve got Oz mucking about for the camera inches from your rear.

Eventually we made the top and celebrated this unlikely achievement with the local delicacy of undercooked sausage.

With a descent dangerous even for machines without double digit horsepower and actual suspension, the race was on to reach the limits of the 20-year-old C90s. Maybe in an act of respect to the paranoid foolishness of the dictator who built the pass back in 1970 to keep out the Soviets, the one-km tunnel beyond the summit was completely dark. After 500m Oz remembered to remove his sunglasses and switch on the headlights, but they barely helped.

Then the road dipped in and out of cloud, coating the surface in a film of damp to join the grit, potholes and a stray donkey.

But this was the first real speed we’d seen since the Dover/Calais ferry and nothing was to deter us as we piled in the corners, each trying to take the lead. The usual slowing procedure of pulling the front brake was abandoned after we discovered that doing so pitched the nose up, instead of down, and set the suspension off into a series of undulations lasting throughout the corner.

We might have got a knee down had the footpeg not got there first, sending up a shower of sparks. That and the sight of four riders jockeying for position on what looked at first glance to be armoured bicycles persuaded most of the locals in their Dacias that the normal rule of ‘might is right’ should be abandoned. Most gave way quickly, which was lucky because the combination of speed, competition and crap machinery had taken Matt back to his banger racing days and he was starting to incorporate other vehicles into his racing line.

Our stupid grins told the whole story: the Transfagarasan is epic.