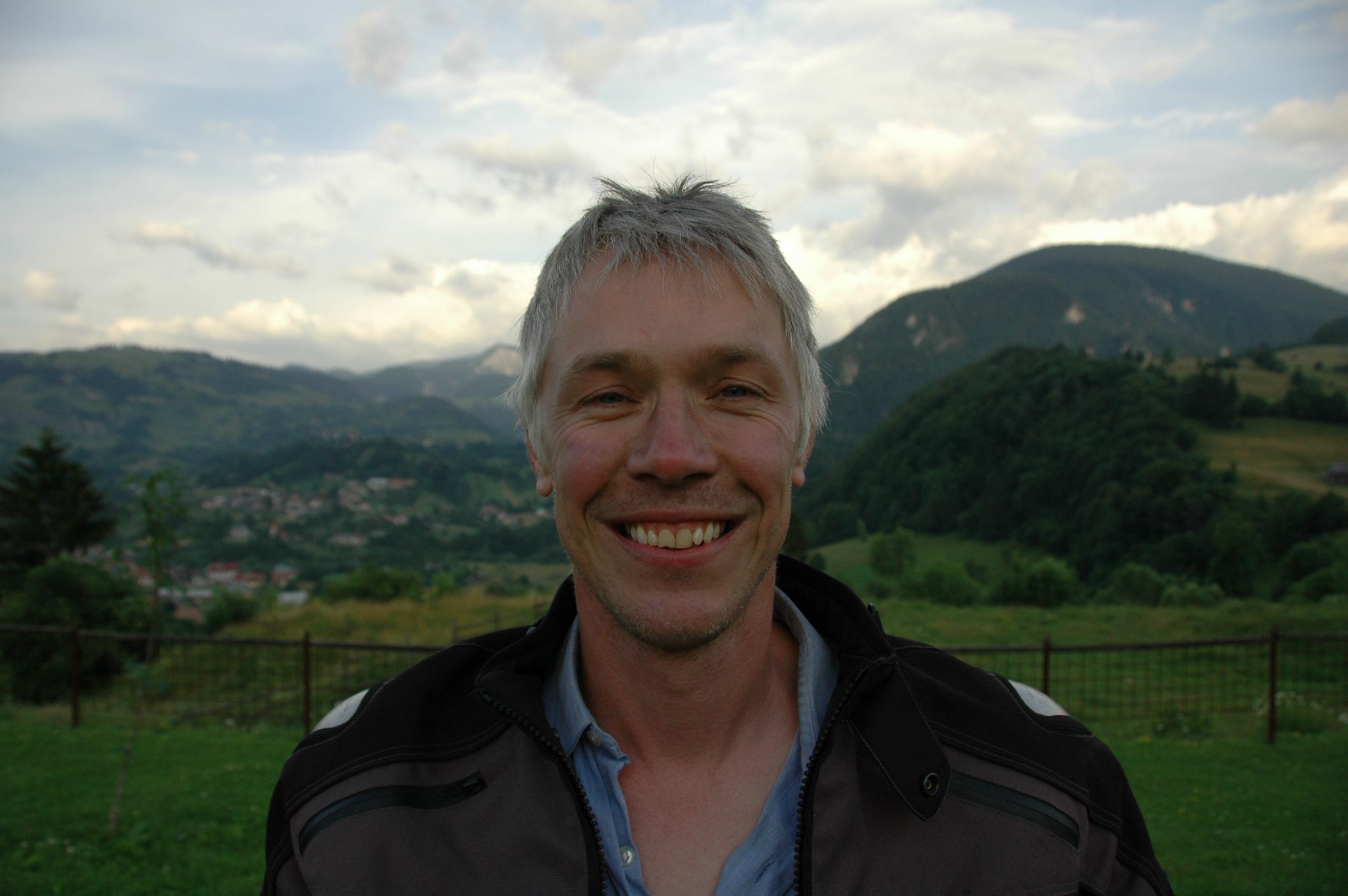 The 5th rider of the Apocalypse 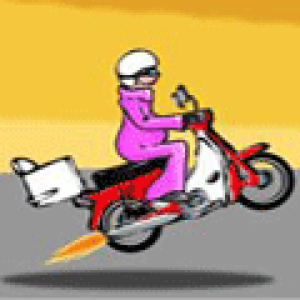 So far we had witnessed a lack of preparation rivalled only by the last time we went on a trip. The failure of Nick’s engine to be fair wasn’t anticipated since we had always assumed the rest of the bike would fall apart first.

Some might say that this situation was inevitable since Nick was in possession of the “jinx”. For those of us that have witnessed a number of rallies involving Nick there is an undeniable propensity for things that he touches to either explode, crash, or crash and explode. And when this happens there is always a common denominator. The Porsche keyring.

Some people like to carry good luck charms like a Saint Christopher. Nick has the Porsche keyring. Unfortunatley it seems to embody the anti-christ when it comes to good fortune.

It started some 18 months ago on the Piste & Broke rally. His Porsche (which was attached to the key ring at the time) ended up leaving the road and coming to rest in a forest with damage from which it never recovered.

Then during the Car Trek rally in a moment of drunkeness Nick threw his own trousers on to the campfire along with his car keys. The subsequent polyester inferno consumed the key required to turn off the immobiliser on his spaceship though somehow the Porsche keyring survived without a scratch.

Now, in a layby in Hungary, we found ourselves seriously behind schedule with a bike using more oil than petrol and refusing to start. There, in the ignition, there was the Porsche keyring. We should have driven a wooden stake through the it there and then.

With us dropping further and further behind schedule we really needed to get some distance under our belts so it was agreed that we would only stop when absolutely necessary. A short time later we noticed Nick had gone missing. He was found by the side of the road claiming that he had only stopped out of absolute necessity. He was in fact being truthful. He’d run out of fuel.

By the time Kaspars in the support van had noticed we’d all gone missing we were another hour behind schedule.

Finally we crossed the border in to Romania and pulled in for a fuel/water/pee stop. As Nick went to turn off his engine he noticed something unusual, no ignition keys. He then had a vague recollection of something bouncing down the road a little while back but admitted so many things had fallen off he’d assumed it was another non-essential item like an indicator.

Fortunately security is something of an extravagance on a Yamaha Townmate so we found that we didn’t really need the key since a lollipop stick was just as effective.

As you can imagine things were not boding well for the trip. Europe was meant to be the easy bit but here we were having to stop virtually every hour for some mishap or another. The good news was that now the Porsche keyring had committed suicide, the jinx would be lifted.

And then just when things had gone for a couple of hours without incident we got caught in a violent thunderstorm while halfway up a mountain in Transylvania. Bearing in mind we were actually in the clouds at the time the thunder was deafening and lightning was bouncing off the hill just in front of us.

By the time Kaspars had arrived in the support van we were beyond wet. It seems although the keyring was gone, it was wreaking havoc in the afterlife or maybe Nick himself now possessed its powers. Admittedly we had no proof that Nick had caused the thunderstorm but whilst huddled shivering in the back of the van we asked Nick outright whether he had a birthmark of the number”666″.

When the rain stopped and we dared venture outside we found Charlie’s bike on its side in a puddle of oil and petrol after being blown over in the storm. We could have sworn at that point a black raven landed on a nearby tree and exchanged glances with Nick.

Then the reality of the situation began to hit home. Waiting for us a few miles up the road was the Transfagarasan Highway, an epic mountain pass reaching to over 2,000 metres with not much in the way of safety barriers.

It’s so steep and winding that even in a half decent vehicle the average speed is only 25mph. It would be a big strain on all our bikes and in hindsight we should have invested heavily in oil stocks since Nick’s bike would be sure to push OPEC to its limits with its demands for oil.

With a shrug of our shoulders we clambered back on the bikes and headed further up in to the mountains slightly wary of the fact we might be in the company of the fifth rider of the apocalypse.

PrevPrevious PostThe truth about Nick’s bike.
Next PostA road only a Dictator could build.Next 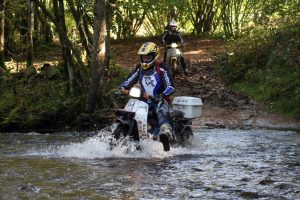 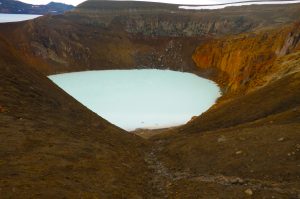 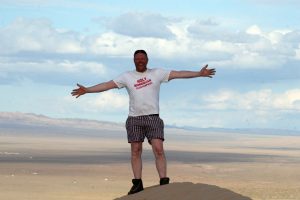 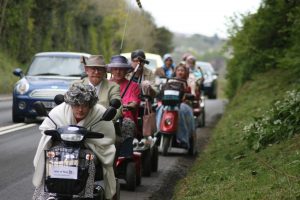 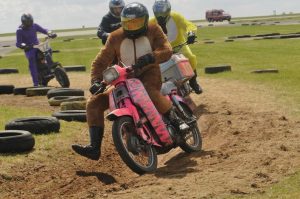 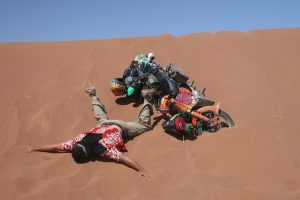 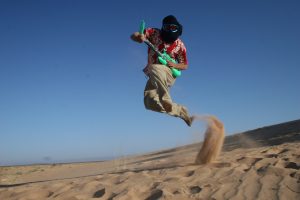 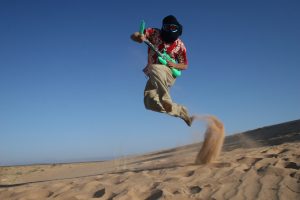 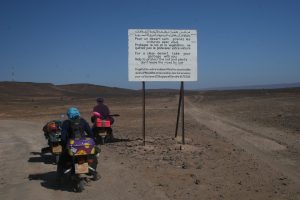 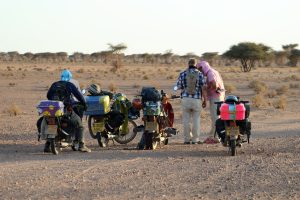